There is little doubt that to Iqbal a woman’s most import­ant role is that of a mother. He likene­d mother­hood to...
By Dr Riffat Hassan
Published: May 27, 2010
Tweet Email 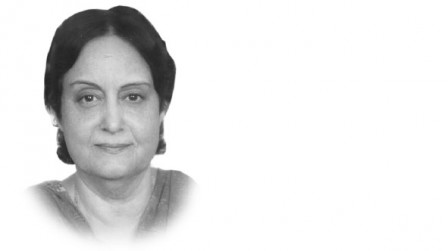 There is little doubt that to Iqbal a woman’s most important role is that of a mother. He likened motherhood to prophethood in Rumuz-e-Bekhudi (Mysteries of Selflessness): Motherhood is mercy, being linked/By close affinity to Prophethood/And her compassion is the Prophet’s own/For mothers shape the way that men shall go/Maturer, by the grace of Motherhood/The character of nations is; the lines/That score that brow determine our estate. (Translation by A J Arberry).

In according the highest respect to motherhood Iqbal is in keeping with Islamic tradition in which a hadith that says paradise lies under the feet of your mother is universally known and accepted. Iqbal’s view that mothers are the pillars of a stable society, in that they nurture and guide future generations, may be regarded as “conservative” but it is not meant to diminish women in any way. It should be seen as representing a just and positive perspective in light of the growing number of single mothers, particularly in the west, many of whom live below the poverty line even in affluent societies such as the US.

In Javed Nama, Iqbal depicts the Sphere of Mars as an ideal spiritual democracy where there are no masters and no servants, no beggars and no priests. The only disturbance in this perfect Sphere is caused by the appearance of a European woman who tries to teach women how to become emancipated. The primary reason underlying Iqbal’s desire to limit a woman’s freedom appears to be his belief that this would distract her from the proper execution of her most important responsibility, namely that of taking care of the upbringing of the next generation. One of his statements on this subject reads: “Nations which give women more freedom than is necessary regret their mistake at one time or another. Nature has imposed such important responsibilities on a woman that if she tries to discharge them fully, she cannot find the leisure to do any other work. Taking her away from her real duties and giving her work which can be performed by a man would certainly be wrong. For instance, making a woman into a typist or clerk is not only a violation of the laws of nature but a regrettable attempt to turn human society topsy-turvy.”

Iqbal considered it crucial for the development of a Muslim society that its women expend their energy on being good wives and mothers. To him, as to most Muslims, Fatima, threefold blessed on account of being the Prophet’s (pbuh) daughter, Ali’s wife and Hussain’s mother, is the perfect role model for women. In his tribute to “lady Fatima, the perfect pattern of Muslim womanhood,” Iqbal points out a number of attributes that he values in her — her unlimited love, willingness to render selfless services, self-surrender to her husband’s will and pleasure and her kindness, fortitude and patience.