Notifi­cation on ban of plasti­c bags issued only a few days earlie­r by home depart­ment
By Our Correspondent
Published: March 25, 2018
Tweet Email 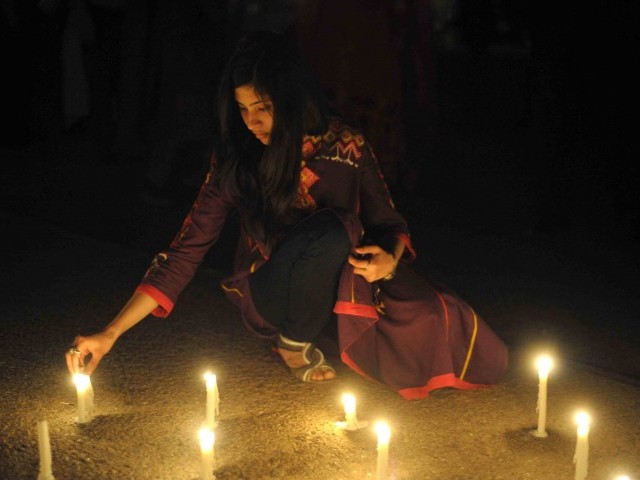 KARACHI: On Saturday at 8:30pm, the Worldwide Fund for Nature (WWF) – Pakistan joined 184 nations around the world in marking the ninth edition of ‘Earth Hour’. This was the movement’s biggest edition yet in a global moment of solidarity for climate change.

Landmarks across the country switched off their lights and joined WWF-Pakistan’s call to stand with millions of people to combat climate change and protect biodiversity and nature.

Along with support from other provincial assemblies, the Sindh Assembly also pledged its support for Earth Hour and to take initiatives to address the issues of climate change and biodiversity loss.

A notification on the ban of plastic bags was issued only a few days earlier by the home department and is in keeping with the three pledges for Earth Hour that WWF-Pakistan is asking individuals to take. The numerous places where lights were switched off included Frere Hall and the Sindh Assembly building.

As part of Earth Hour, people, cities and businesses around the world switched off their lights for one hour to draw attention to the urgent need to step up in the fight against climate change and protection of biodiversity.

With the historic Paris Agreement on climate change now in full force, there has never been a more crucial time to hold leaders accountable and show strong public support for efforts to stem climate change. From the Eiffel Tower to Taipei 101 and the Empire State Building to the Acropolis, thousands of landmarks switched off their lights in solidarity as individuals, communities and organisations worldwide delivered on their potential to help change climate change, the planet’s biggest environmental challenge yet.

WWF-Pakistan Regional Director for Sindh and Balochistan Dr Babar Khan, in his message, said that the country has embraced the true essence of the Earth Hour movement this year.

“We have come a long way since 2010, when WWF-Pakistan first celebrated Earth Hour. The seed we sowed has taken root and people today are comparatively more well-aware of the climatic changes around us,” Dr Khan said, adding that if we take a look at our past, we will understand that the Earth Hour movement will shape our future.

It is a constant reminder that we should lead towards the transformation of a more prosperous and renewable future, he said.

“Pakistan is among the top 10 countries affected by climate change and this environmental challenge is already impacting our economy severely. On this Earth Hour, by joining WWF, millions of people around the world have shown their commitment to the planet,” shared WWF-Pakistan Head of Communications and Marketing Asma Ezdi, adding that switching off all unnecessary lights for one hour on Saturday was a symbolic gesture.

“All of us should pledge to take action in our capacity as an individual, business and policy and decision-maker to reduce our footprint, save nature and protect the environment,” she said.

The year 2018 marks the 11th anniversary of Earth Hour, which started as a symbolic event in Sydney in 2007. Today, it is the world’s largest grassroots movement for the environment, ensuring that people who are on the frontlines of climate change are also empowered to be the planet’s first line of defence.

The one-hour event continues to remain the key driver of the movement encouraging individuals, communities, households and businesses to turn off non-essential lights as a symbol of their commitment to the planet.

In other parts of the country, events were organised in Lahore, Islamabad, Quetta, Bahawalpur, Khanewal, Faisalabad, Peshawar, Nathiagali, Gilgit, and Sukkur.