Watch: Bilawal kissed on the cheek by PPP worker in K-P

Watch: Bilawal kissed on the cheek by PPP worker in K-P 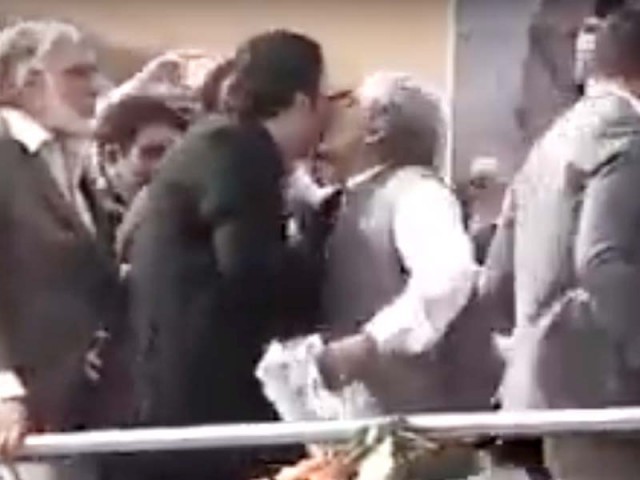 Bilawal was addressing a public rally in Bannu on Saturday. SCREENGRAB

As Pakistan Peoples Party (PPP) co-chairman Bilawal Bhutto Zardari addressed a public rally in Khyber-Pakhtunkhwa’s Bannu town on Saturday, an over eager party worker while greeting him on stage laid a kiss on his cheek.

Footage of the incident shows the party worker absolutely ecstatic to meet the PPP chief.

Addressing the rally, Bilawal said that terrorists and former military ruler General (retd) Pervez Musharraf alike all must be treated according to the law of the land.

“Be it Musharraf or terrorists, all should be arrested, cases should be registered and culprits should be penalised in accordance to the law of the land,” he said.

“Terrorists can only be punished by enforcing the law,” he added.

Be it Musharraf or terrorists, all must face the law: Bilawal

Commenting on Naqeebullah Mehsud’s extrajudicial murder in Karachi, the PPP chairman said terrorism can never be defeated if ‘abduction of people and targeted killing’ continued. “This is not the matter of Naqeebullah shaheed only, but the entire nation,” he remarked.

“We need institutions that ensure the supremacy of law… terrorism cannot be uprooted by the deployment of force only. We cannot deploy military in every street and corner of the country,” he stated.