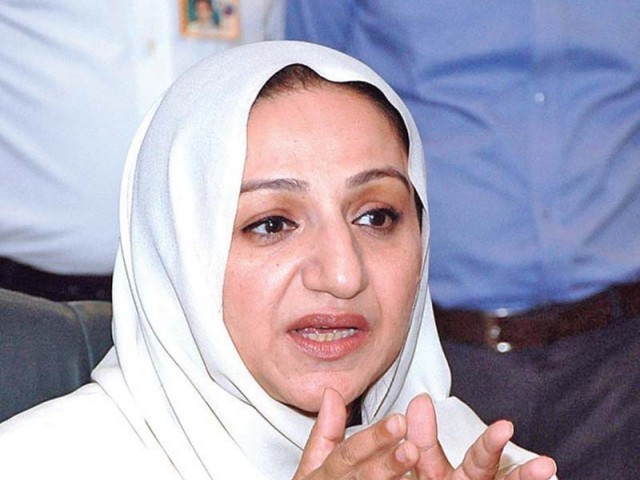 ISLAMABAD: Federal Minister for National Health Services Saira Afzal Tarar was conferred Sitara-i-Imtiaz by President Mamnoon Hussain on Pakistan Day in recognition of her leadership that led to the turnaround in polio situation.

In 2013 Pakistan was facing a raging outbreak of polio, a disease that causes permanent irreversible disability. Hundreds of children across the country were falling prey to the polio virus and the country was facing international embarrassment being held responsible for export of the virus to countries in the region and beyond, said a press release issued here Friday.

Terrorists and miscreants in some parts of the Federally Administered Tribal Areas had imposed ban on the polio campaign, polio teams were unable to operate with rampant threats and attacks in different parts of the country.

The Polio Eradication Program was being driven by international agencies with no national ownership. As soon as Saira Afzal Tarar took office in June 2013, she accepted the challenge and led from the front with utmost dedication and commitment to save Pakistani children from the crippling disease and restored the country’s image internationally as Pakistan was being considered the stumbling block in achieving the goal of a polio free world.

Saira Afzal Tarar was instrumental in having Polio Eradication declared a National Health Emergency, in establishment of the National Task Force on Polio Eradication led by the Prime Minister. She established the National Emergency Operation Centers and its corresponding Provincial Emergency Operation Centers in Provincial Capitals and Fata to create nerve centres for coordination of all stakeholders in the fight against polio.

With her efforts, Cabinet Committee on Polio Eradication and Immunization was established which allowed for involvement of security apparatus in collaboration with Interior Ministry and Pakistan Army, in combating and eliminating challenge posed by the militancy to the Polio Program.

She ventured out into the provinces and areas of serious concern making road trips to affected regions in the heart of Balochistan.

She helped form Provincial Task Forces and met Provincial Chief Ministers convincing them to lead the campaigns and accord it top priority.

She made an all-out effort to mobilize resources for the program committing sufficient funds nationally and garnering support from international partners to launch a major offensive against the Polio virus across the country.

She took the floor at the major international forums including the UN, World Health Assembly and International Monitoring Board for Polio Eradication effectively presenting Pakistan’s case and sharing Pakistan’s epic fight back under her leadership to turnaround the Polio situation.

Realizing that an efficient vaccine management system was critical to success of the polio campaigns, she led a major reform process in establishing a world class vaccine management and tracking system which won ISO certification and was presented as a model globally for developing world to adopt.

Cognisant of the proliferation of Poliovirus in the federal capital Islamabad, Saira Afzal Tarar brought all stakeholders together, visited the katchi abadis in the outskirts of the city and personally monitored polio campaigns to arrest the spread of virus.

Tarar brought transparency and good governance to the program ensuring that the resources are optimally utilized for our children.