Says the award belong­s to each and every one who has worked with missio­nary zeal
By Our Correspondent
Published: March 23, 2018
Tweet Email 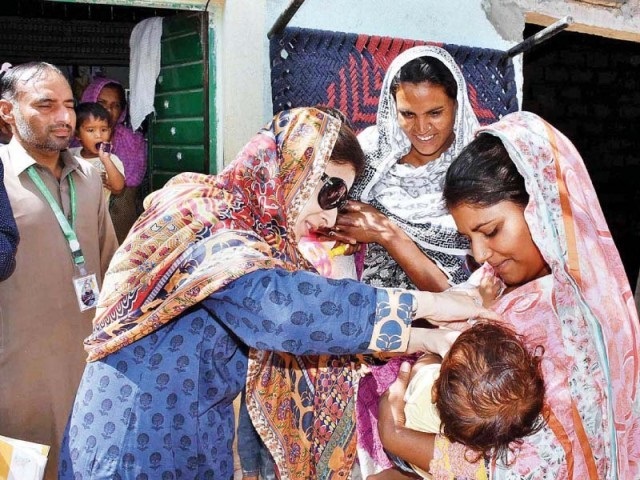 This award is in recognition of the heroic effort of the brave foot soldiers of this programme -260,000 Sehat Muhafiz. PHOTO: EXPRESS

ISLAMABAD: The Prime Minister’s Focal Person for Polio Eradication Senator Ayesha Raza Farooq who received the coveted Sitara-e-Imtiaz on Pakistan Day by the president for her exceptional leadership in turning around the polio programme has dedicated her award to the heroic effort of polio teams working across the country.

“This award was received by me but belongs to each and every one who has worked with missionary zeal, unflinching commitment and dedication to stop polio in its ranks,” said Senator Ayesha in a statement after receiving the award.

This award is in recognition of the heroic effort of the brave foot soldiers of this programme -260,000 Sehat Muhafiz. PHOTO: EXPRESS

She added that with our collective effort we have defied the odds and turned around the Polio Eradication Program from a raging outbreak in 2013-14 to reporting the lowest ever cases in the programme’s history in 2017.

She made special mention of the National and Provincial Coordinators of the Emergency Operation Centers for Polio for steering the programme ably and making an all-out effort to improve the quality of the campaign.

“This award is in recognition of the heroic effort of the brave foot soldiers of this programme -260,000 Sehat Muhafiz – who trek the length and breadth of our great country spreading hope and light in the shape of polio drops to protect our children from lifelong disability,” Ayesha said.

“The job of polio eradication is not yet finished and we will not rest until the destination of zero polio cases is achieved. Under the leadership of the prime minister and with the strong commitment of the provincial leadership, and most importantly parents, we will continue to work hand in hand with our partners to achieve the cherished goal of a polio-free Pakistan,” the Senator added.

No concept of judicial martial law in Constitution: CJP