Winner will take on Karach­i Kings to fight for the second final spot
By Abdul Majid
Published: March 20, 2018
Tweet Email 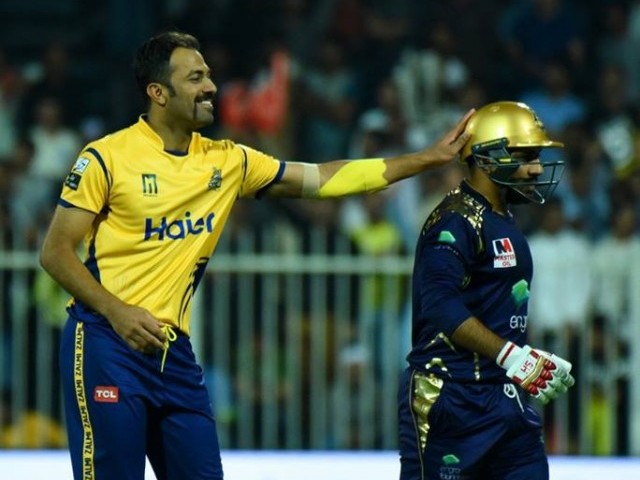 CAPTAINS’ CALLING: Sarfraz Ahmed and Darren Sammy led their teams to victories when Quetta and Peshawar faced in league matches in PSL3 and they will be asked to outperform each other once again in the first eliminator on Tuesday in Lahore. PHOTO COURTESY: PSL

The third edition of the domestic T20 league kicked off in the UAE with 31 matches played across Dubai and Sharjah, where six teams played ten matches each to contest for the top four position in the league table.

Islamabad United, with 14 points and seven wins, ended as the top team, while Karachi Kings, in their very last league match of the PSL3 bagged a win to finish second with 11 points.

Meanwhile, the two contestants for the Tuesday match, Peshawar and Quetta, ended with 10 points and five wins apiece — third and fourth on the table respectively — setting each other up for the first eliminator in Lahore.

The winner of their match will face Karachi Kings in Lahore on Wednesday after the Imad Wasim-led side were beaten down and out by Islamabad United in the qualifier as the latter booked their spot in the landmark final, scheduled to be held in Karachi on March 25.

Head to head in PSL3

Quetta and Peshawar faced each other twice in the third edition of the PSL, where both teams bagged one win each.

In the 10th league match, Peshawar came out on top courtesy a one-legged captain Darren Sammy, who limped into the ground at the business end of the match and with his team chasing 142 to win, punished the Quetta bowlers and guided his side to a five-wicket victory.

Meanwhile, in the 23rd league match, Quetta avenged themselves.

Defending champions Peshawar started PSL3 on the wrong foot as they were beaten easily by debutantes Multan Sultans in the tournament opener.

The won the next match but their inconsistency resulted in them nearing relegation, but they found their A game just at the right moment and won the last two league matches to eventually end on the third position.

They will be entering the eliminator with two wins and confidence on their side.

Quetta, two-time PSL finalists, have a lot to prove this year, but once again without Kevin Pietersen, this year’s signing Shane Watson and England opener Jason Roy.

The trivalent decided against coming to Pakistan for the playoffs, but Quetta scooped Sri Lanka all-rounder Thisara Perera from Multan Sultans as replacement. Meanwhile, top-order Yorkshire batsman Tom Kohler-Cadmore and West Indies left-hand opener Johnson Charles will also be a part of the Quetta Gladiators squad.

However, Quetta will not only have to make up for the loss of their foreign superstars but will have to make do against the lack of winning form when they face Peshawar on Tuesday.