Almost all sides will have to play withou­t few of their intern­ationa­l supers­tars
By Nabil Tahir
Published: March 17, 2018
Tweet Email 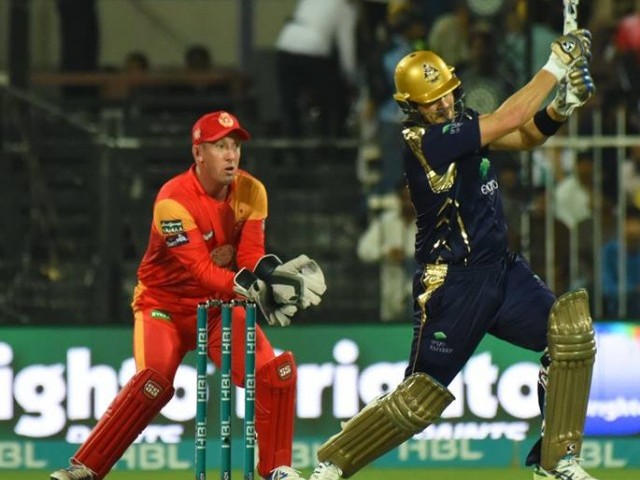 Big loss: Pietersen and Watson have been the cornerstone for Quetta’s remarkable qualification for the playoffs but the Gladiators will be without the duo for the play-offs. PHOTO COURTESY: PSL

KARACHI: The Pakistan Super League’s (PSL) group stages have ended and teams turn their attention towards the playoffs, having to make adjustments for the foreign players who have opted out of travelling to Lahore and Karachi for the eliminators and final.

With tickets for all three games already sold out, anticipation and excitement has not been dampened by the players who have pulled out of the tournament.

A number of English players, including Eoin Morgan, Alex Hales, Jason Roy, Sam Billings and Kevin Pietersen, will not be coming to Pakistan.

“I am not available for the Pakistan leg of the PSL. It’s been a long winter for me and I have been away since December so unfortunately I am unavailable,” said England skipper Morgan, who was captaining Karachi Kings in the absence of Imad Wasim.

Islamabad United, who qualified for the first qualifier, will be missing the firepower of Hales and Billings at the top of the innings.

Quetta Gladiators, meanwhile, will miss Jason Roy who joined just two days back. Even bigger losses for the two-time finalists will be that of Kevin Pietersen and the current holder of the Fazal Mehmood cap Shane Watson.

Quetta skipper Sarfraz Ahmed is under no illusions regarding the hit his team will suffer once they lose this devastating trio of batsmen.

“We played really well in the pool matches last year and finished top of the league,” said Sarfraz. “Our top performers were foreign players so we naturally missed them in the final. That was a huge setback for our team and we lost the final because of that.”

However, the wicketkeeper batsman believes they have had more time to prepare for the eventuality of these players opting out and therefore are better equipped this time around of dealing with their absence.

“This year we know that we will be missing our top performers again,” he said. “That will surely reduce the morale of the team but we are planning to groom and polish our local talent in a way that they are able to perform for the team in the knockout stages.”

Sarfraz also discussed the way his team has always been written off but have managed to confound the critics time and again.

“Nobody expected us to qualify for the final four once again,” said Sarfraz. “However, we have shown exactly what we are capable of and there is no reason for us to stop believing in ourselves or to change the way we play. We need at least one of the top six batsmen to stay till the end so that people can go for it from the other end.”

The National Stadium of Karachi, meanwhile, is still undergoing final touches as it prepares for the big final, with tickets for the game having been sold out within 12 hours of going online.