At least 8,500 police person­nel to be deploy­ed around the Nation­al Stadiu­m
By Faraz Khan
Published: March 19, 2018
Tweet Email 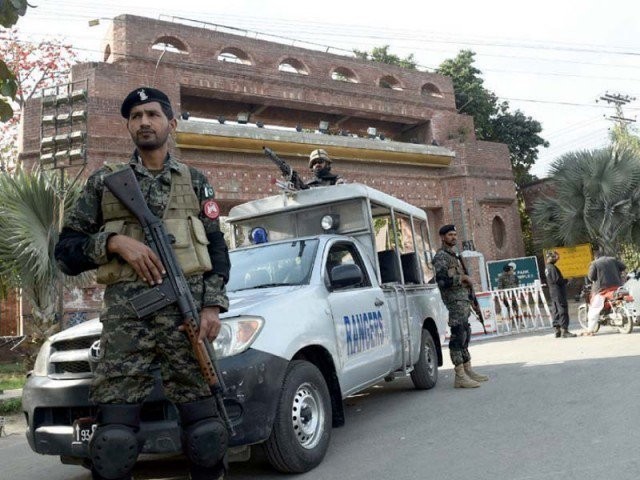 The routes leading to Hassan Square and New Town and the Dalmia road will be closed for traffic during the match. PHOTO: EXPRESS/FILE

KARACHI: Foolproof security arrangements have been finalised for the Pakistan Super League (PSL) final to be held on Sunday, March 25 at the National Stadium, Karachi.

The paramilitary force will have security control of the stadium, while 8,500 police jawans and 1,600 traffic wardens will be deployed across the metropolis to assist commuters in avoiding traffic jams and other hurdles.

Traffic Deputy Inspector-General (DIG) Imran Yaqoob Minhas, flanked by East Zone DIG Zulfiqar Larik, Brigadier Shahid of the Rangers, Information Minister Nasir Hussain Shah and the East deputy commissioner held a joint press conference at the East Zone DIG’s office on Monday to brief the media on the traffic and security arrangements made by the government and law enforcement agencies for the final.

According to the traffic plan, five designated places – three on University Road and one each at Kashmir Complex and on Dalmia Road are reserved for parking and shuttle services. An empty ground near Urdu University, Sunday Bazaar just opposite Baitul Mukarram Masjid and an empty ground next to the Hakeem Saeed Park are among the shuttle services and parking zones situated on University Road.

“No spectator will be allowed to approach the National Stadium directly. They would have to use the shuttle service provided by the government to reach the stadium on the day of the PSL final,” said the traffic DIG.

“The shuttle service will drop spectators to three dropping zones, Aga Khan University Hospital’s Gate 3, Bahria University and the Expo Centre, which are about 200 to 300 metres from the stadium,” he said.

DIG Minhas said that the three busiest thoroughfares of the city – Sharae Faisal, Sharae Pakistan and Rashid Minhas Road – will not be closed for vehicular traffic, but the routes leading to and from Hassan Square and New Town will be closed for traffic from 11am till the end of the match.

The 35,000 spectators will reach the stadium after crossing multiple check points. Brigadier Shahid said that parking zones will be secured by the Rangers and police jawans.

PCB in race against time to get National Stadium ready

“Without having a ticket or CNIC, no one will not be allowed to avail the shuttle service,” Brigadier Shahid said.

He said that the spectators will go through many security checks and walkthrough gates. “Besides the government, the Pakistan Cricket Board (PCB), Rangers, police, army helicopters and Special Service Group (SSG) commandos of the Pakistan Army are also part of the security arrangements,” he explained.

DIG Larik, however, said that security inside the stadium will be the primary responsibility of the paramilitary force, while 8,500 jawans of the police will perform security duties in four layers and traffic wardens will be posted outside the stadium.

“The match will start at 7pm, but the stadium’s gates will close at 5pm,” he explained, adding that only mobile phones be allowed, while food or mobile phone chargers will not be allowed. Food will be available for purchase inside the stadium by designated vendors of the PCB.

He said that the thoroughfares will, however, provide for medical emergencies. Separate arrangements have been made for the VIP, VVIPs and the media, he said.

“This is our event and we will all have to make it successful,” said the information minister.

“Besides providing protection to the players, facilitating the citizens is also our priority,” he said.

Helicopters of the Pakistan Army and commandos will remain alert on the day of the PSL final.

‘No new dam acceptable without consensus among all stakeholders’