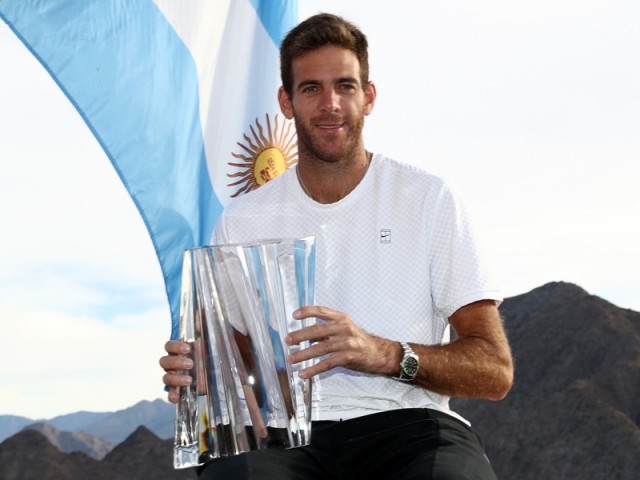 DIFFERENT GOALS: Argentine Juan Martin del Potro says he is not thinking about his ranking and just wants to keep up the pace and win as many titles as possible. PHOTO: AFP

INDIAN WELLS: Juan Martin Del Potro, once one of tennis’ hottest young talents before his career was derailed by injuries, won the Indian Wells Masters on Sunday two years after almost quitting in frustration.

“I couldn’t imagine this moment. I mean, everybody knows I was really close to quitting tennis before my third surgery on my left wrist,” said Del Potro after upsetting world number one Roger Federer 6-4, 6-7 (8/10), 7-6 (7/2) in Sunday’s championship match.

He continued: “I made a big effort to come back. I have everything what I want, and I want to keep improving my game to see what can I do. I had very bad moments a few years ago and I don’t want to think about that anymore. I am just enjoying my life and playing around the world. I am excited to see what is next.”

World number eight Del Potro is back in the top ten rankings this season for the first time since 2014. He dropped to No. 1,045 before beginning his comeback from the left wrist surgeries in 2016.

The 29-year-old from Argentina says he is not thinking about his ranking and just wants to keep up the pace as long as he can.

“Well, it’s so big. I cannot believe I won this tournament, beating Roger in a great final and level of tennis,” he said of his first win in an Indian Wells final and second straight ATP title in a row. “I don’t care about the numbers. I just want to keep winning titles like this if I can. But the first thing is try to be healthy during the whole year and play where I like to play. Now I have to do a smart schedule on clay to feel 100 percent for the rest of the season.”

Del Potro will now head to south Florida with the other ATP players to compete in the Miami Masters.

He wants to stay silent on his celebration plans but did say he has is saving something special for when he gets to Miami.

“I cannot tell you,” he joked of his party plans. “It will be Miami, maybe tomorrow, but that’s enough.”

Del Potro also won the title earlier this month in Acapulco, where he beat three top eight players in a row to clinch his 21st singles crown.

Asked on Sunday if beating the world number one in Indian Wells and winning consecutive finals is a sign that he is back, Del Potro said: “I don’t know. Maybe I’m in better shape, because few years ago I never win a title like this. I’m surprising myself. I don’t like to compare this time with few years ago, but I’m just enjoying what I have to do every day. And it’s like a surprising life to me, and I’m so happy for that.”