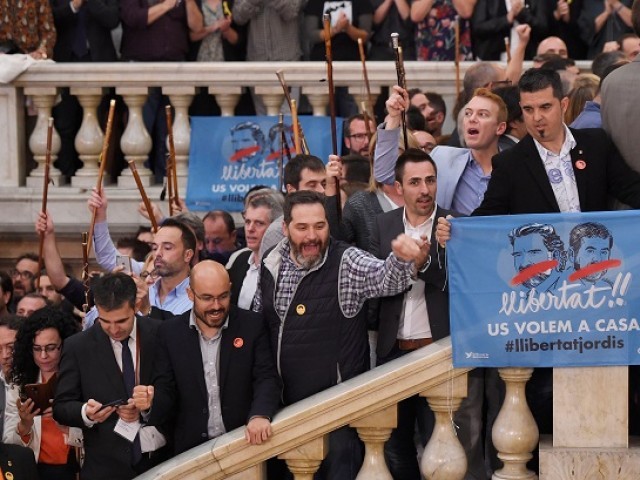 BARCELONA: Tens of thousands of people marched in Barcelona on Sunday to demand the formation of a new government in Spain’s Catalonia region leading to its independence from Madrid despite formidable legal obstacles.

“There are more than two million of us citizens of Catalonia who want to go forward now, clearly, towards the Catalan republic,” ANC vice president Agusti Alcoberro told reporters.

Separatist parties won an absolute majority of seats in the 135-seat Catalan parliament in a snap election on December 21 but have so far failed to form a new government.

The agreement between Together for Catalonia led by deposed and self-exiled regional president Charles Puigdemont and the leftist ERC still needs to be ratified by the small far-left separatist CUP party.

The region of 7.5 million people has been under direct rule from Madrid since Prime Minister Mariano Rajoy dissolved the Catalan parliament last October following an independence referendum not recognised by Madrid.

Debate on the appointment of a new regional president had been set for Monday but was postponed indefinitely because the sole candidate, former ANC president Jordi Sanchez, is in jail on sedition charges along with three other separatist leaders.

Puigdemont, who went into self-exile in Belgium, has ruled out his candidacy because of the legal obstacles.

Catalonia to press ahead with independence if Madrid suspends autonomy

“The fact that today, in the 21st century, there are people in prison for their ideas is a disgrace,” Maria Soria, a 56-year-old paediatrician, said at Sunday’s march. “It’s anti-democratic.”