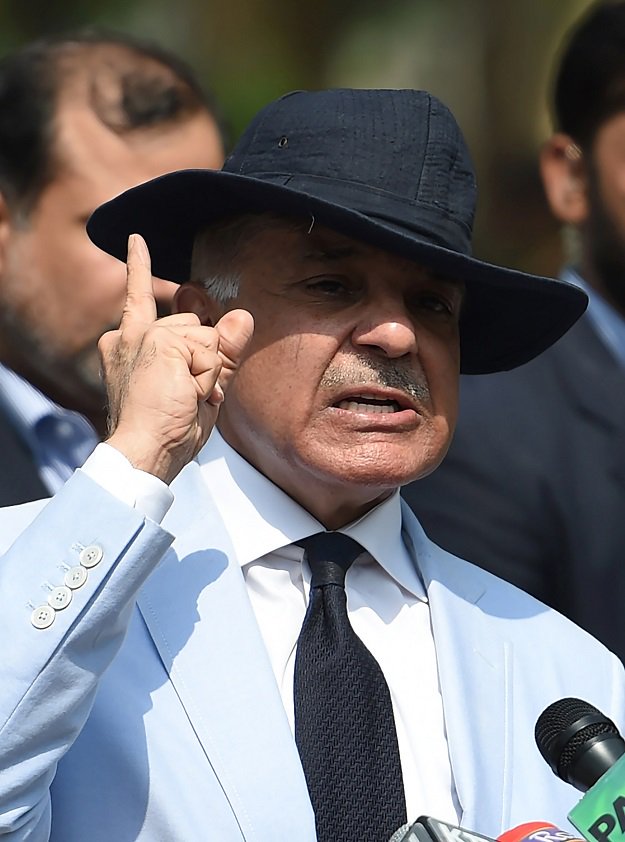 LAHORE: Punjab Chief Minister Muhammad Shehbaz Sharif has said that Pakistan Tehreek-e-Insaaf (PTI) chairman Imran Khan is in alliance with Pakistan Peoples Party leader Asif Ali Zardai and both of them have miserably failed in their respective provinces as they did nothing for the betterment of the people.

The Pakistan Muslim League-Nawaz president said this on Sunday while addressing a huge public gathering at the Jinnah Stadium Gujranwala. His comments come after Sadiq Sanjrani emerged as the consensus candidate of the opposition for top slot of the upper house of parliament.

“Zardari’s government has turned Karachi into Mohenjo Daro and the government of Naizi sahib [Imran Khan] has pushed Peshawar into darkness. Zardari and Niazi have made alliance. However people are well aware of their coalition because both of them have done nothing in their provinces and therefore they are now afraid to confront the public,” he added.

“Niazi sahib doesn’t have the courage to face people in K-P and that is why he is levelling baseless allegations against us. It is only because we have provided better educational facilities to the children from underprivileged families.”

He vowed that with the blessings of Allah his party would “bury the alliance of Zardari and Niazi”. He said there was no better judge than public and their performance in public service was evident before everybody. “So we hope that the people will make the fair choice in the upcoming elections. If God and the people give us the opportunity to serve, not only Punjab but every city of Pakistan will progress and all units of our country will be developed like Punjab.”

Earlier, the CM inaugurated welfare projects worth billions of rupees, including the grand project of Jinnah Interchange worth Rs8 billion, as he visited Gujranwala on Sunday.

Shehbaz also laid foundation stones of three schemes: a two-way road from Sheikhupura to Gujranwala which will be constructed at a cost of Rs6 billion, the Gaukher Sports Arena, and a construction and maintenance project of a thoroughfare from Main GT Road to Medical College Gujranwala.

While addressing the public gathering, CM Shehbaz said the Pakistan Muslim League-Nawaz (PML-N) government had completed development projects worth 40 billion rupees for the uplift and prosperity of Gujranwala district in the past four years and in the same manner over 60 billion rupees have been spent in this regard during the last nine years.

Zardari vows to regain power from Sharif and Imran

The CM while announcing the Metro-bus service for Gujranwala said the work on this project would be started immediately if the PML-N won the upcoming general elections. He also announced granting the Rachna College of Engineering and Technology (RCET), Gujranwala university status, constructing multi-storey Surgical Tower at Gujranwala District Headquarters Hospital, building a flyover worth Rs1.5 billion at Gujranwala’s Alam Chowk, and widening of Gujranwala to Khanqah Dogran Motorway Interchange road from 12 feet to 24 feet.

The CM promised that if people would give them opportunity to serve in the upcoming elections, all these projects would be started and brought to completion within the stipulated time.

“This huge gathering of people is a clear proof of the fact that people are extremely fond of the PML-N-and Nawaz Sharif.”

The CM said he had come to Gujranwala to congratulate people on completion of the Jinnah Flyover which had been constructed at an estimated cost of around Rs8 billion. “This project is a wonder of Pakistan which will illuminate the hearts of the people with lights and blossom of flowers.” Furthermore, he added that people from Rawalpindi, Lahore and other cities who earlier used to visit Gujranwala for food had to face difficulties but now the Jinnah Flyover would facilitate them in the best possible way.

He said the PML-N had completed the Nandipur Power Project four years ago by working day and night under the dynamic leadership of Muhammad Nawaz Sharif.

During the Peoples Party People’s government in Centre, the machinery of this project stayed unattended on Karachi port for four years and their parts were stolen, Shehbaz said.

Thousands of scholars associated with the Punjab Educational Endowment Fund (PEEF) were playing their part in the development of the country, the PML-N leader added.

“We have ensured supply of standard medicines in government hospitals and CT scan machines are made available in all district hospitals of the province. People of remote areas are being provided with standard medical facilities at their doorsteps through mobile hospital.”

The CM added: “We have laid a network of roads, bridges and flyovers. The best IT centre has been established in Lahore. Our policy of public service is hurting the opponents.”

The CM vowed that his party would generate new opportunities of jobs and clean water projects would be constructed throughout the country. He said the performance of Nawaz Sharif was in front of the masses as the major projects announced by him had been completed.  “Having seen our performance, the people have to make the right decision with the power of vote.”

He said the PML-N government had provided farmers with cheap fertilisers, interest-free loans and low-priced electricity to the tube wells.

“Wheat season in around the corner. Like previous years the farmers will get reward for their hard work as we will not allow anyone to exploit their rights,” he added.

“If Allah Almighty give us the opportunity to serve, we will make Pakistan a welfare state in the light of the ideals of Iqbal and Quaid-e-Azam. We will change the destiny of Pakistan,” he vowed.

The CM said he was responding to the allegations levelled against him through his work and performance for the betterment of the people.