Walk organised at AKUH to raise awareness about Parkinson's

Walk organised at AKUH to raise awareness about Parkinson's 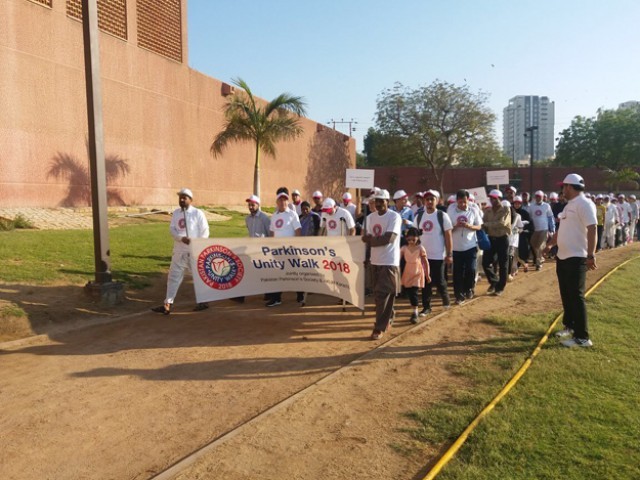 A large number of people participated in the walk to create awareness about Parkinson's disease. PHOTO: COURTESY AKUH

The Aga Khan University Hospital (AKUH) organised a walk to raise awareness about Parkinson’s disease. The number of patients suffering from the neurological disorder is expected to double by 2030. The disease causes nerve cells to degenerate over a period of time, however, the rate of degeneration varies from patient to patient.

The event, titled ‘Parkinson’s Unity Walk’, featured talks by AKUH specialists including neurologists, psychiatrists and neurosurgeons. The programme also offered a health camp where patients could consult with doctors.

The event is hosted every year at the AKUH in partnership with the Pakistan Parkinson’s Society (PPS), which was founded over a decade ago by Haroon Basheer, a businessperson who suffered from Parkinson’s.

Aziz Hussain, 76, was diagnosed with Parkinson’s five years ago because of tremors in his hands, which is one of the most common symptoms of the disease. Since then, he has been managing the disease.

Parkinson’s disease can be diagnosed with tears

“I’ve befriended the disease and I’ve been lucky that I have good doctors looking after me. I know this disease is not my shame, but many others suffering from it either don’t know that they have it or feel ashamed of their memory loss and this leads to depression,” Hussain said.

Parkinson’s patients often experience short-term memory loss, which is coupled with high levels of depression and anxiety. “Patients [of Parkinson’s] lose motivation. Anxiety is very common because of the fear of not remembering things,” said Dr Quratulain Khan, an assistant professor at AKUH’s department of psychiatry.

The need for holistic care is important to manage the disease, which includes addressing the disease neurologically but also through physiotherapy, speech therapy and other support.

Marium Khan, 21, said her grandfather had been suffering from the disease for many years and his condition deteriorated over time because he did not receive holistic care. “They give him medication and say this disease is incurable but here I am realising that holistic care is necessary [for Parkinson’s] and quality of life can be improved through it.”

Besides the annual walk, the PPS hosts a monthly support group at the AKUH for patients and their caregivers where patients learn about techniques to manage daily issues such as swallowing and speech.