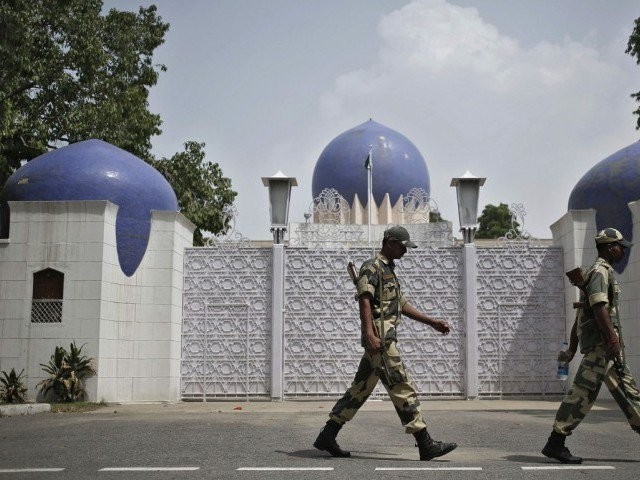 High-level officials and staff of the Pakistani High Commission in New Delhi are being subjected to different kinds of harassment for the last three days, diplomatic sources told Express News on Saturday.

A senior Pakistani officer was harassed when his vehicle was stopped in Chanakyapuri neighbourhood of the Indian capital and was left with no other option but to return to the high commission.

In another incident, children of Pakistan’s deputy high commissioner were stopped while going to school and their driver was harassed, said the sources, adding that two recent accidents involving vehicles of the high commission were also being considered as ‘deliberate acts’.

There were also reports of visitors and labourers being unduly stopped from going in to the high commission building.

Sources said the Pakistani diplomats, their children and families were finding it difficult to stay in New Delhi due to the intimidating behaviour of the Indian authorities.

Pakistan has officially conveyed their reservations on the matter to the Indian authorities, saying that performing their duties in New Delhi will become very difficult under the current circumstances.

According to the diplomatic sources, a total of around 500 to 600 Pakistanis including 104 officials and staffers at the high commission and their family members are currently stationed in the Indian capital.

The news came just days after Pakistan and India agreed on the release of certain civilian prisoners – women, mentally ill and above 70 years of age — amid simmering tension between the two nuclear armed neighbours.

Frequent clashes along the Line of Control (LoC) and the Working Boundary have recently heightened tensions and even triggered fears of a larger conflict.

However, the latest development of prisoner exchange indicated that the two sides perhaps were working behind the scene to de-escalate tensions. In December, the national security advisers from the two countries met in Bangkok reportedly to find options for some level of engagement between the two countries.

Relations between Pakistan and India have been tense and continued to deteriorate for many months. The two sides accuse each other for the current impasse.