Cast of the film discus­ses everyt­hing that makes it stand out from other Pakist­ani films
By Shaheera Anwar
Published: March 7, 2018
Tweet Email 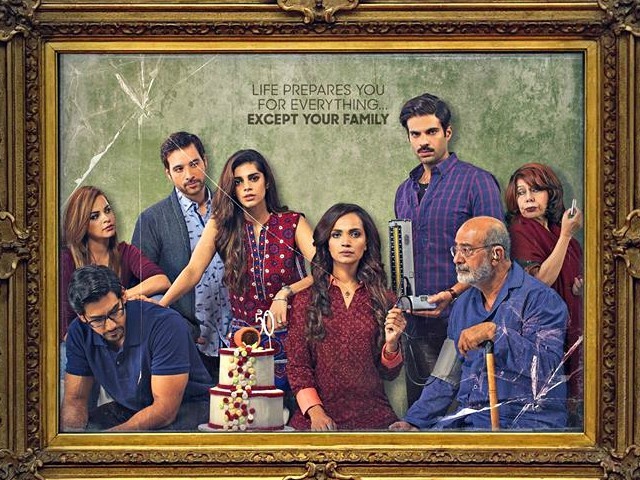 KARACHI: It’s no surprise that the number of local films being released each year is growing exponentially. However, not all of them manage to do well at the box office. With recent releases such as Parchi, Pari, Maan Jao Na, Azad and Allahyar and the Legend of Markhor, Pakistani cinema can add another feather to its cap for 2018. Cake The Film, starring Aamina Sheikh, Sanam Saeed and Adnan Malik is all set to release in March and the visuals are unlike any other Pakistani film. Asim Abbasi, the director of Cake seems to have mastered the art of storytelling. This is not only limited to the visuals but also in terms of character reveals and illustrations used in the posters, created by Karachi-based illustrator Samya Arif. The Express Tribune (ET) caught up with the cast of Cake to find out more about the mysteriously-titled film ahead of its release.

Our stars are out and about for promotions in #Islamabad ‍♀️ want to catch them!? Keep an eye out right here! #CakeFam #Promotions #CakeTheFilm #30thMarch

ET: What is ‘Cake’? Why is the film, so unconventionally, named ‘Cake’?

Adnan Malik (AM): We like to look at it as a metaphor and also as a literal title as one of the characters, Zareen is into baking. The title is a metaphor for all the layers that come together and how these layers define a family. It’s about the different ingredients that come together and make something that is often quite delicious, that is, a cake and in this case, a family. Also, cake is something very universal. In any part of the world, a cake is something that unites people – whether it’s a birthday or any other grand event – and signifies celebration.

Aamina Sheikh (AS): The script was very strong. It was one of those that you just want to hurry up and read till the end. The story is very gripping as it’s well-written and intricate. It made me laugh and it made me cry and I think that’s enough to sell a script to an actor. Moreover, it was the about the cast that was to come together and the production design. All of that built the confidence in me – at least – to take this offer.

AM: I’ve done limited work as an actor. My first experience was amazing working in Sadqay Tumharay, however, my second experience in Dil Banjaara wasn’t as great. When I was measuring the differences, I realised that the leadership and the vision is really what puts it all together. I met Asim and read the script, which was amazing. It really moved me and had me turning pages. Plus, having Aamina and Sanam was a bonus. I have worked with both of them in different capacities and for me, they are the finest actors in the country so it was a real privilege.

Sanam Saeed (SS): I agree with Adnan and Aamina – it was the script and the team. Moreover, the script was very relatable. It moved me emotionally and I had never been moved by a film before – by some scenes in dramas, yes – but not as a whole. It would be a crime and a stupid move to not sign up for Cake. The actors were consulted and kept engaged in the process throughout so it has been a very enriching experience.

ET: How was it like coming back together after ‘Dam’ – after eight years?

AS: We’re surprised that we haven’t been cast together before, especially with the on-going sister thing. But I’m very lucky to have Sanam across from me in this film. The fact that she gives her 200% to a scene is going to make me shine, so it’s really just about complimenting each other. It’s a blessing to have a co-actor like her. It was a long time coming and it finally happened so it’s very organic and natural with her – I feel at home.

Day 2 #Promotions the girls look super cute in @peplum.pk styled by our very own @swearuponcoco

SS: I was waiting to work with Aamina again – in a larger capacity. It’s a pleasure and a treat to work with an actor that inspires you and gives you a performance with the same integrity and power as you do. It’s all about the team effort and it’s good to have someone on the same page.

ET: Tell us about your characters?

AS: I’m playing Zareen who is the middle child amongst three siblings but she sometimes appears to be the eldest – though, not through her own choice. Over time, she develops certain traits that are very ‘bari behen’ type and she battles with them a lot. She’s slightly OCD – watching her parents’ age and dealing with the siblings’ dynamics. Zareen is also an aspiring baker with a lot of alone time so she’s an interesting complex character who is also figuring herself out.

AM: Romeo is a compassionate man *laughs*. He’s an observer with a very big heart. He is kind of the emotional and moral compass of the film – that’s all I can say about him.

The wait is over! To watch the full trailer for Cake just click on watch more or go to our bio link. In cinemas from 30th March! #CakeTheFilm #30March #Easter2018 #industalkies #excellencyfilms #zabfilms #aaminasheikh #sanamsaeed #adnanmalik #pakistanicinema

SS: Zara comes with an emotional baggage of her own. She doesn’t approach things with the same amount of responsibility as Zareen does. Zara is more frivolous with a laid-back attitude, which comes from being the youngest. So by the time the responsibility comes to her, it’s filtered through the older siblings. Zara is also a UK-return so she’s been away from the family for a long time. It takes her time to adjust living with all the family members under one roof.

ET: What are some of the most memorable moments you shared on set?

SS: There is a 10-minute one-take scene in the film and the process of that is, by far, the most memorable one because it was gruelling and very challenging for all of us.

AS: That one-take scene was not only about the actors moving – it’s about the lights, camera crew, location, frames and all the invisible figures. One-takes are not used in films often, worldwide, so this was quite an experience for us.

AM: Much like theatre, there were about 200 moving parts in that scene. It was more of a live, single-take performance that we rehearsed for. It took us one hour to do one take and Asim wanted us to do six perfect ones on the night after so it was very thrilling.

ET: Are there any dance numbers in ‘Cake’?

AM: Dance numbers have their role in storytelling but that is not the kind of story that Asim wanted to tell, hence, it didn’t fit in. However, it should never be taken for granted that dance is an integral part of storytelling, especially in the subcontinent. But now, even in India, a lot of films without any dance numbers are doing very well. Cake doesn’t need any dance numbers and you won’t miss it either. You’re going to come out of the cinema, hopefully, thinking that Cake was a great film and will not even realise that there weren’t any dance songs.

ET: What’s your take on the recent ban of Pakistani artists in India?

AS: In my opinion, it’s an extreme measure. Unfortunately, politics play a huge role in this region but if this is the case, I feel that we should just focus on our own industry and get it off the ground. We should use this time of isolation from our neighbours to hone our skills.

AM: I think there’s a lot of pros and cons. Some of our artists who went to India and made a name for themselves have also brought a lot of knowledge back which we gained from. At the end of the day, everything develops by sharing knowledge so I don’t think that national boundaries matter. We have the same language and we’re learning something from them which will only help our industry and make our films better. As Aamina said, since we now have this ban imposed, we should use it to our own advantage.

ET: Are there any other projects in the pipeline?

AM: Cake 2 – where I am a superhero and Aamina and Sanam are doing naagin dances *laughs*. Jokes apart, I am waiting for a good script and a good team to work with.

ET: Why should people come and watch Cake? What can people take away from the film when they leave the cinema?

AS: It’s a beautiful film to watch. It’s a treat for the eyes, the soul and the heart and it’s bound to move you. I think you will get a lot of emotional fulfilment after watching Cake.

SS: Cake will open up dialogue. It’s a reflection of your own life and you’ll get an insight of your own family life and short comings. It’s very real, raw and organic – there hasn’t been a more realistic film in Pakistani cinema yet. They are either too stylised or suddenly get lost and become artsy. This isn’t an art film at all. It’s a very simple, straight forward, relatable story which is also very genuine.

AM: Cake is very dilchasp (interesting) and gripping. You’re definitely going to laugh and shed some tears too. You would also probably want to start a conversation with your parents or children after watching the film. Our hope is that when you leave the cinema, you feel enriched. Cake is sure to give you a good experience – unlike any other experience you’ve had while watching a Pakistani film.

With Cake hitting theatres across the country on March 30, 2018, we can’t wait to have a slice of it too.