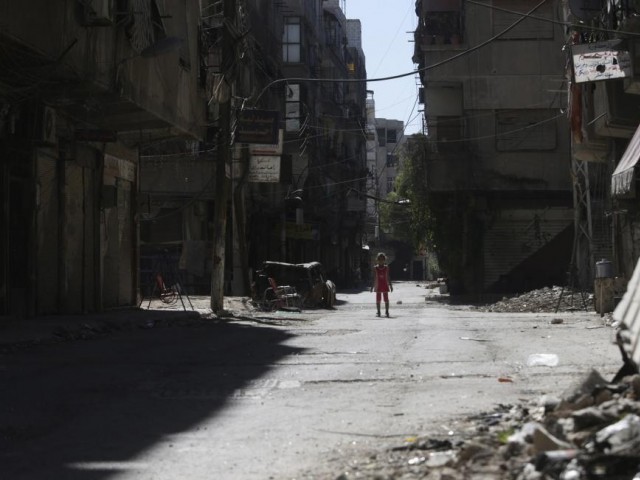 A girl stands in a damaged street in Ain Tarma, in Eastern Ghouta, a suburb of Damascus. PHOTO: REUTERS

WAFIDEEN CHECKPOINT, SYRIA: Civilians in Syria’s Eastern Ghouta shunned Russia’s offer to quit the besieged enclave for a second day Wednesday, as rebels and Moscow blamed each other for the humanitarian deadlock.

The bombardment that killed 600 civilians in 10 days has quietened since the Kremlin ordered a daily “humanitarian pause”, but not one of the battered region’s 400,000 residents left to board buses provided by the regime.

AFP reporters saw no movement at the Wafideen checkpoint through which would-be evacuees were told to exit the Eastern Ghouta enclave that the government lost in 2012 and has besieged almost ever since.

UN officials voice frustration over lack of cease-fire in Syria

“The humanitarian corridor is open to all those who wish to return to the fold of the homeland, but so far nobody came and this is the second day,” said a military officer at the checkpoint.

Regime-backer Russia on Monday announced five-hour halts in the bombardment of the enclave and said it was guaranteeing civilians safe passage to flee.

The move fell far short of a full ceasefire voted for by the United Nations Security Council – but was still welcomed inside the enclave as some respite from one of the bloodiest assaults in Syria’s seven-year-old war.

Despite the step, the UN demanded that all sides must implement the total truce approved on Saturday, and said some 40 trucks loaded with aid were waiting for the violence to stop.

Moscow’s “humanitarian pause” echoes a similar tactic employed by Russia and the Syrian regime as they looked to force rebels out of second city Aleppo during a ferocious 2016 battle.

No casualties at all were reported when Wednesday’s window closed at 2:00 pm (1200 GMT) but warplanes were back in the sky moments later.
“During the truce, the ceasefire is almost enforced,” said Syrian Observatory for Human Rights head Rami Abdel Rahman, adding that nine civilians were killed in strikes before and after on Wednesday.

The first five-hour “pause” on Tuesday passed with only two killed in regime bombardment, according to the Britain-based war monitor.

The Syrian regime has accused the militant groups inside Ghouta of sabotaging the initiative by shelling the designated humanitarian corridors to hold civilians as human shields.

“The terrorists are impeding those who want to cross, either by putting pressure on them or by firing on the humanitarian corridors,” the military officer said, speaking on condition of anonymity.

The officer at Wafideen checkpoint warned that if Thursday was equally fruitless, the measure may be dropped, raising fears the kind of bombardment that killed dozens of civilians every day this month would resume.

“The truce was meant to last three days. It could be extended but why go on if there are no results,” he said.

Inside Eastern Ghouta, the residents AFP spoke to were distrustful of a measure put in place by Russia, whose warplanes rained munitions on them alongside Syrian aircraft.

The three main armed groups inside the territory, which lies within mortar range of Damascus, said they wanted more international guarantees.

In a letter sent to the United Nations on Tuesday, they said they were willing to expel the militant factions that also have a footprint in Eastern Ghouta.

But they demanded any evacuations be conducted under the supervision of a UN mechanism.

Russian President Vladimir Putin, whose portrait was featured alongside Syrian counterpart Bashar al-Assad’s at the Wafideen checkpoint, blamed the crisis on the rebels’ “constant shelling”.

“Shells even crash into the grounds of the Russian embassy and the economic mission. Should we continue to tolerate this? Of course not,” he said.

His foreign minister Sergei Lavrov said it was up to the rebels “to act” to ensure the brief halts in fighting bring relief for civilians.

At a Security Council meeting UN humanitarian chief Mark Lowcock demanded the ceasefire deal agreed at the weekend go into force to allow aid to enter.

“When will your resolution be implemented?” he asked.

Lowcock said trucks loaded with supplies have been poised to go to 10 locations since Saturday – but there has been no access for humanitarian convoys, nor authorisation by the regime to go into the besieged areas.

US representative Kelley Currie accused the regime of violating the ceasefire, while Russian ambassador Vassily Nebenzia blamed the rebels.

While diplomats at the UN wrangled over implementing the ceasefire, the regime was making a push for territory on the fringes of the besieged enclave.

A military officer at the deserted checkpoint said ground fighting on the edges of Eastern Ghouta, where most anti-regime fighters are deployed, may change the dynamic.

The Observatory said regime forces had made limited advances in Ghouta’s Shaifuniyeh and Hosh al-Zawahira districts.

The head of the monitoring group said 38 regime and allied fighters were killed in three days of fighting in the Al-Marj area on the southern edge of the enclave.