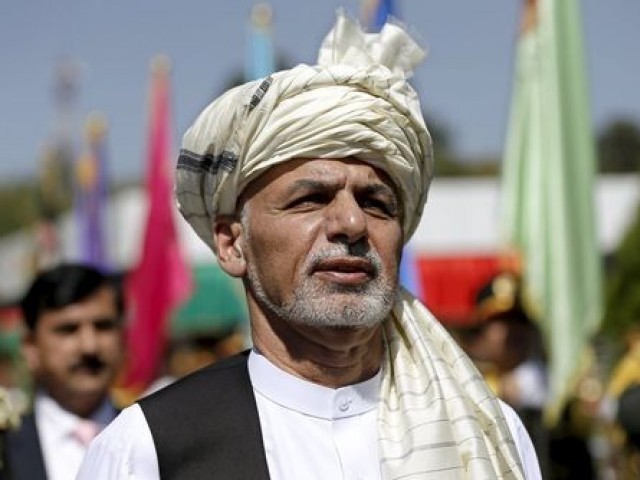 ISLAMABAD  : Pakistan has thrown its weight behind Afghan President Ashraf Ghani’s fresh initiative seeking unconditional talks with the Taliban and said it would make all-out efforts to facilitate the peace process.

The latest initiative Ghani has unveiled on the first day of the international conference under the Kabul process envisaged unconditional talks with the Afghan Taliban, something that Islamabad had been pushing for long.

In a clear departure from the Afghan government’s earlier stance, Ghani not only proposed peace talks without preconditions but also hinted at brining necessary amendments to the country’s constitution in order to accommodate the Taliban’s concerns.

The Afghan president even offered the insurgents to open their political office, release of prisoners and remove sanctions against Taliban members who engage in peace talks.

At the outset of his address, the Afghan president also reached out to Pakistan by saying: “We’re ready to restart talks about peace with Pakistan again and forget bitter experiences of the past and start a new chapter.”

Ambassador Zakhilwal briefed the NSA on the international peace conference in Kabul. He informed that President Ashraf Ghani had given a message of peace and reconciliation to the Taliban, together with a message of closer engagement and cordial relations with Pakistan, with a view to promoting peace, stability and prosperity in the region.

He hoped that being the closest neighbour of Afghanistan, Pakistan would make its due contribution to the process which would help both Afghanistan and Pakistan.

Janjua told the Afghan envoy that Pakistan wanted an early closure to the internecine bloodshed in Afghanistan.

“Peace in Afghanistan was essential for peace in Pakistan. Pakistan believed in a vision of common and shared future with the people of Afghanistan, that is why Pakistan had all along supported efforts for political reconciliation under international and regional peace initiatives,” Gen Janjua’s office said in a statement.

“Pakistan welcomes President Ghani’s offer of seeking peace through dialogue and understanding and would do its best to facilitate the realisation of this noble initiative,” the statement added.

The two agreed to seize the moment collectively and to maintain their contacts in pursuit of the common objective.

Despite recent strain in ties, Islamabad and Kabul have been working tirelessly behind-the-scenes to find some common ground.

The visit of Army chief General Qamar Javed Bajwa in October last year believed to have played a major role in bridging some gap between the two estranged neighbors.

Within weeks after the visit, Pakistan quietly handed over at least 27 members of the Afghan Taliban and the Haqqani network to Kabul, in an unprecedented move showing Islamabad’s willingness to cooperate with Afghanistan.

The two sides in subsequent months continued to stay engaged. Officials said Pakistan had been stressing the need for unconditional talks with the Taliban for many months.

Taliban are a part of the social fabric of Afghanistan, Kabul tells US diplomat

One official said Pakistan consistently told Afghanistan and the US that the solution to the long-running unrest in the war-torn country could only be found through dialogue.

But for that, officials, said Afghanistan had to incentivise the Taliban to come to the negotiating table.

“Today’s announcement by President Ghani certainly is a step in the right direction,” the official added.

It is believed that Pakistan in recent months through back channels exerted pressure on the Taliban to accept the offer of talks.

On Monday, the Taliban expressed their willingness to hold talks with the US.

But officials cautioned against undue expectations, saying the process could be treacherous and difficult.

Pakistan had in the past facilitated direct talks between the Afghan Taliban and Kabul. But the process broke down – first, due to the death of Afghan Taliban chief Mullah Omar, and then due the killing of his successor in a drone strike in Balochistan.

Pakistan blamed elements within the Afghan government for the collapse of the peace process. Because of such bad experiences, any talks under the new initiative would probably be kept away from the public glare.

Earlier, in Kabul Afghan President Ashraf Ghani offered recognition of the Taliban as a legitimate political group on Wednesday as part of a proposed political process that he said could lead to talks aimed at ending more than 16 years of war.

The offer, made at the start of an international conference aimed at creating a platform for peace talks, adds to a series of signals from both the western-backed government and the Taliban suggesting a greater willingness to consider dialogue.

“We are making this offer without preconditions in order to lead to a peace agreement,” Ghani said in opening remarks to the conference attended by officials from around 25 countries involved in the so-called Kabul Process.

“The Taliban are expected to give input to the peace-making process, the goal of which is to draw the Taliban, as an organisation, to peace talks,” he said, adding that he would not ‘

The United Nations mission in Afghanistan welcomed the offer and said it “strongly supports the vision for peace through intra-Afghan dialogue”.

It was unclear whether they would be prepared to shift their stance, despite growing international pressure.

However Ghani said the momentum for peace was building from neighbouring countries that increasingly saw the necessity of a stable Afghanistan.

“The Taliban show awareness of these contextual shifts and seem to be engaged in a debate on the implications of acts of violence for their future,” he said.

There was no immediate response to Ghani’s offer although one Taliban official, speaking on condition of anonymity, said it was being studied by senior Taliban leaders.

Ghani said the process would be accompanied by coordinated diplomatic support including a global effort to persuade neighbouring Pakistan, which Kabul has regularly accused of

aiding the Taliban, of the advantages of a stable Afghanistan.

He renewed an offer of talks with Pakistan, which rejects the accusations and points to the thousands of its citizens who have been killed by militant groups over the years.

In return for Ghani’s offer, the Taliban would have to recognise the Afghan government and respect the rule of law, including the rights of women, one of the priorities for Afghanistan’s international partners.