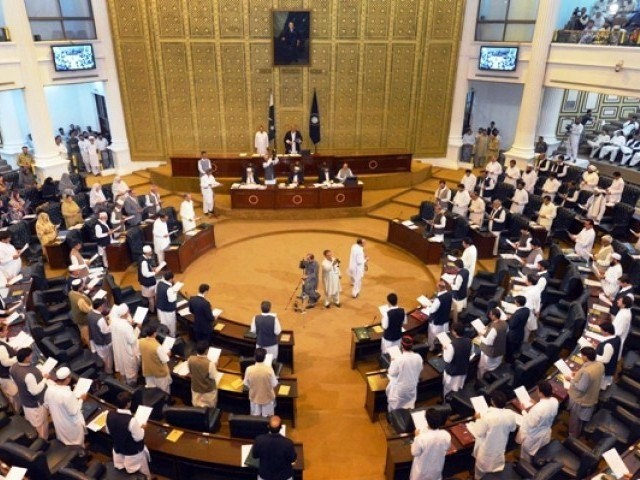 PESHAWAR: As part of its move to regularise employees working in different departments, the provincial government on Monday formalized services of over 4,900 ad hoc or contract employees.

The Khyber-Pakhtunkhwa (K-P) assembly on Monday passed the Employees (Regularisation of Services) Bill 2018 with a majority of votes. The bill will regularise employees working on 60 different projects in various departments of the provincial government.

Last year on December 27, the provincial cabinet had decided to regularise 4,743 contract employees working on 53 government projects. Sensing a government amenable to granting demands, employees from different departments approached the cabinet and urged consider including them in the subsequent regularisation law.

When the final version of the bill was passed on Monday, it had swelled to include over 4,900 employees working in 60 different projects.

K-P to get a censor board

The house on Monday also passed the private member bill, the K-P Censorship of Motion Picture (Films, CDs, Videos, Stage Dramas and Shows) Bill 2018 to regulate films, CDs, videos and stage shows which are played on cables or any other medium.

Under the new law, the K-P government can make censor boards which will be headed by a chairman and at least three members appointed by the government.

“No person shall make or arrange a public or private exhibition of a film, CD, video, stage drama and show without the prior approval of the censor board,” the law read, adding that anyone wishing to organise a screening will have to apply for a certificate to do so.

Exhibiting uncertified content shall incur a punishment which could be up to three years in jail or a fine of Rs100,000 or both.

The House passed two resolutions wherein it demanded that the federal government retain the number of provincial assembly seats in Chitral, Charsadda, Swabi, Abbottabad and Haripur which were allegedly being “given” to other districts after delimitation.

After Assembly Speaker Asad Qaiser termed the resolution too ‘Chitral-specific’ it was amended to include other affected districts.

Saleem said the people of Chitral were already deprived and that the loss of a provincial assembly seat could further increase the sense of deprivation.

“The government should keep Chitral’s seat intact otherwise the people of Chitral will boycott the elections,” he warned.

PML-N lawmaker Amina Sardar moved a resolution demanding that the federal government to use diplomatic tools at its disposal to stop atrocities taking place in Syria. The resolution was passed with majority votes.

Baldev Kumar, a PTI candidate for its empty minority seat in the K-P assembly was supposed to be brought from prison to be produced before the house for taking his oath.

The seat had fallen vacant after Sardar Suran Singh had been gunned down. Interestingly, Kumar is accused of being involved in Suran’s murder and is currently in jail on judicial remand.

However, with Kumar yet to be convicted, the Peshawar High Court had directed the assembly to issue production orders for Kumar and to administer him a lawmaker’s oath.