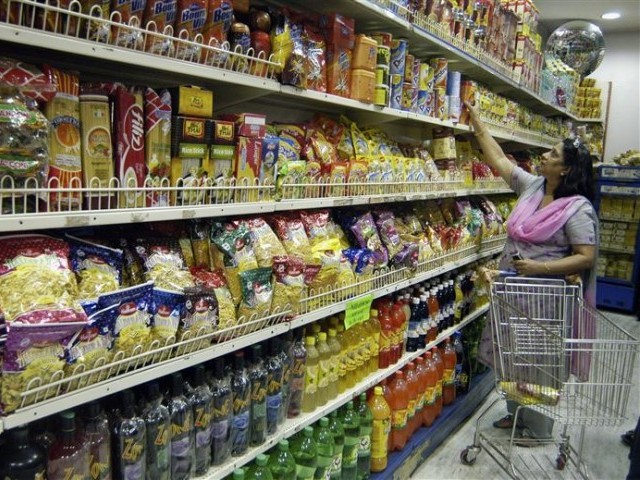 A woman shops in a grocery store. PHOTO: REUTERS

ISLAMABAD: The Ministry of Industries and Production is seeking a support package of around Rs9 billion and exemption from public procurement rules in an effort to revive fortunes of financially-troubled Utility Stores Corporation (USC) and help it purchase commodities without any hassle.

Talking to The Express Tribune, sources revealed that state-owned USC was finding it hard to clear arrears of Rs3.9 billion, which were payable to the suppliers that had threatened to stop sale of products to USC retail outlets.

Apart from this, they said, the Ministry of Industries was seeking Rs1.72 billion in Ramazan Package from the federal government. In this regard, the ministry is looking for approval of the Economic Coordination Committee of the cabinet. Separately, it is seeking a bailout package of Rs3.10 billion for the USC which was nearing bankruptcy in the wake of withdrawal of subsidy from different commodities sold at its outlets.

USC particularly caters to the needs of poor consumers by providing them essential commodities at discounted prices. The industries ministry has recommended a subsidy of Rs5 per kg on sugar and Rs4 per kg on wheat flour in order to help ramp up sales at utility stores as demand has gone down following the scrapping of subsidy by the current government.

During its four-and-a-half-year tenure, the government has placed civil bureaucrats as USC head, but they are blamed for damaging the entire organisation. So far, no policy has been unveiled to revive the company.

However, the Ministry of Industries has held the USC board responsible for the financial trouble.

Earlier, the cabinet had approved restructuring of the USC board of directors, which paved the way for an increase in the number of members dominated by private-sector representatives.

Later, the Ministry of Industries and the USC management suggested to the cabinet to reduce the role of private sector and cut the number of overall directors so that decisions could be taken quickly and the company’s financial affairs could be improved. It would also result in reduced expenditures on board meetings.

In that regard, the ministry also sent a summary to the cabinet for its consideration. The cabinet approved the proposal and the industries secretary has now become chairman of the USC board.

Before the enactment of Public Sector Companies (Corporate Governance) Rules 2013, the USC board was headed by the industries and production secretary and had seven members. There was no representation from the private sector.

However, after promulgation of the corporate governance rules, the board was reconstituted on April 3, 2014 and expanded on July 16, 2015. The number of directors went up from seven to 15 including 11 independent directors from the private sector and four from the public sector.

A government official claimed that since the board’s expansion, many issues had emerged that prevented USC from functioning smoothly and without hurdles.

In meetings held between the Ministry of Industries and the USC management, they agreed that it would be better to reduce the size of USC board in line with the amended Public Sector Companies (Corporate Governance) Rules 2013.

In the ministry’s summary to the cabinet, it had been proposed that the industries and production secretary should be the USC board chairman and two other officials from the ministry and USC managing director should be its members.