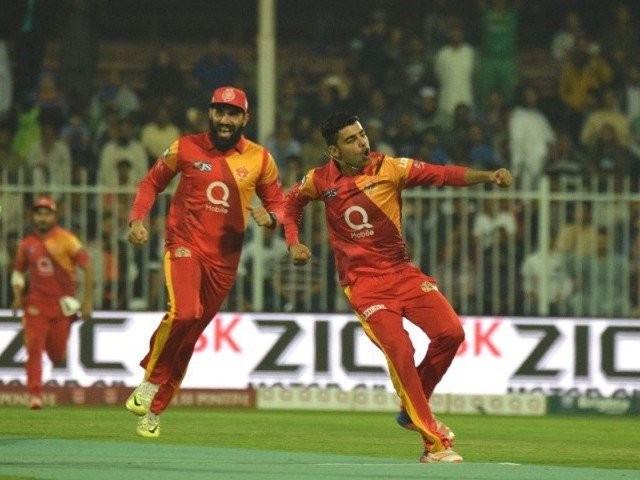 KARACHI: Pakistan Super League’s two winners Islamabad United and Peshawar Zalmi take on each other in the fourth match of the T20 league at the Dubai International Stadium on Saturday.

Rivalries between PSL teams must be allowed to flourish

“We missed a few chances and that was where we handed Multan the onus in the game. We could have won the match but some simple mistakes cost us the win,” Kamran Akmal told The Express Tribune. “We have to gear up for the next match and come up with a better combination to win.”

The wicketkeeper-batsman won a lot of individual accolades in last year’s edition — being awarded the player of the tournament award alongside the best batsman and wicketkeeper awards as well — but admits he needs to put in a better showing than what he did in the first game.

“My performance was not what I expected; I played a lose shot on a pitch that had good bounce,” he said. “I was the top scorer in last season’s edition and I aim to retain that title this year as well. I will be going into the next match with a better mindset and hopefully we will be able to recover since we have had a rest day in between.”

Kamran also praised 19-year-old spinner Ibtisam Sheikh, who was perhaps unlucky to finish with unflattering figures of 0-31 in his three overs. “The boy has the potential to trouble the batsmen,” he said. “He even managed to pose a few problems for Sri Lankan legend Kumar Sangakkara and should have dismissed him as well; only for the fielding to let him down. The coaches are motivating him and we will all be looking to work on our mistakes for the next game.”

West Indian all-rounder Andre Russell has said he cannot wait to return to action for Islamabad United in the third edition of PSL having missed a lot of cricket in the past 12 months.

PSL off to a good start

Russell, who is back with United after serving a year-long doping ban, admitted it was hard to watch his team play in last year’s PSL without being able to take part in the action. However, he did admit that the ban proved to be a learning curve for him.

“It was very hard to watch the matches; not injured, fully fit but still unable to play,” he said. “I’ve been watching a lot of cricket since and I’ve learned a lot from that. I got to understand a lot about cricket. I got to analyse the game more by watching from the outside.”

Islamabad could only finish fourth in last year’s edition and Russell will surely be looking to inspire them to a better finish, but refused to reveal his personal goals for the tournament.

“I don’t like telling others about my goals since it looks bad if I am unable to achieve them,” he said. “I always look to perform with both bat and ball, but I also like to come up with brilliant catches and run outs as a bonus.”