For the untouchables of Johi, it is an irony when Muslims start living in their temple

For the untouchables of Johi, it is an irony when Muslims start living in their temple

Upper caste Hindus in the next town don’t let them worshi­p alongs­ide.
By Hafeez Tunio
Published: May 8, 2011
Tweet Email 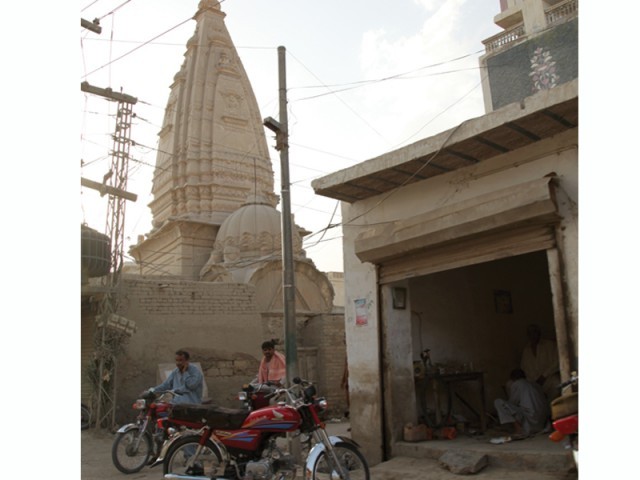 Krishan Mandir was built in the 1920s but was taken over nearly 30 years ago by people who started living inside and along the boundary. Shops were built and rented out as well. PHOTO: NEFER SEHGAL/EXPRESS

In Pakistan, strength is in numbers. Thus, if you are a Hindu and your mandir is taken over by influential Muslims, you don’t say anything. You write a few letters to the authorities, who don’t respond, and then you start going to the mandir in the next town.

The only problem is, that if you are a scheduled caste Hindu, the better off Hindus in the next town won’t let you in to their mandir. This is the case of the Oads of Johi tehsil, who are known for their prowess in making heat-proof mud houses. Their skill set aside, however, this minority within a minority is on one of the lowest rungs of society.

“The upper class Hindus in [the neighbouring] Dadu town have stopped us from going to their mandir,” explained Mir Chand, a secondary school teacher at Johi school.

The sole temple that the Oads of Johi were able to use was Krishan Mandir that is located in main Shahi Bazaar in Johi.

It was built in 1920 and has 35 rooms and a big courtyard but all of the rooms have been converted into small houses and people have set up more than thirty shops around it. The encroachment began in earnest 30 years ago and aside from keeping the Hindus away, people have been telling them to leave the area altogether.

“In the 1990s, then Deputy Commissioner Mir Mohammad Parhiyar had ordered the authorities to remove the encroachment,” said Mir Chand. “But influential people threatened to kidnap us. Therefore we stopped lobbying against the encroachment.”

Chand points to the Chandios, Jamalis and Legharis who he says have given over the shops and houses which they rent out for handsome amounts.

“This was a Hindu-dominated area but after independence, a majority of the people migrated to India, and local people occupied their property, including the mandirs,” he explained.

“We cannot speak out against them because of a lack of support from our community.” This is not the only temple in Sindh that has met this fate, says the Hindu Council. “More than one hundred temples have been occupied by influential people,” said M Lal Harchandani, its general secretary.

For their part, they used the might they had — letters, and many of them were written to the prime minister and president. Little happened.

“Minorities in Sindh are depressed,” he added. “Equal rights have been given in the manifesto of the ruling party but it is only on paper.”

Small wonder there is such bitterness.

“How can you assume good things from a government when its serving officials are occupying temples and other property?” The Hindu Council says it has pointed this out many times to the revenue department in Karachi, but that no one is willing to help them.

For his part, Minister for Minority Affairs Mohan Lal Kohistani told The Express Tribune that he had no idea that the temple had been encroached on in Johi.

“I recently visited Dadu but no one complained to me about this,” he said, adding that he would look into the matter. In the meanwhile, the Oads of Johi can only pray.

There are four main varnas or castes among the Hindus, explained Ashok Arora, a social activist and writer. There are the Brahmins (priests and scholars), the Kshatryas (landowners and rulers), the Vaisyas (merchants), the Sudras (craftsmen and servants) and the Dalits (untouchables). The Oad and Bagri are sub-castes of the Dalits.

“Most Hindus in Sindh don’t believe in the caste system anymore, especially the younger generation. They discourage the practice but some of the older Hindus still follow it,” said Arora.

Despite the diversity within their community, there is no discrimination and temples, including Shiv jo Mandir, are open to everyone, claimed Dileep Kumar, the Dadu district minorities wing president. According to Kumar, they no longer bind community members to the caste system. “We have never stopped anyone from praying in our temple and we have actually started removing the encroachments from Johi Mandir,” he claimed.

There are nearly 1,000 Oads and Bagris in the area and they have mandirs in their houses but Kumar claims they visit the Shiv Mandir also.

The tradition followed by the Oads and Bagris slightly differs from the rest of the Hindu community. Like Muslims, they bury the bodies of their dead rather than burning them but they have no Hindu graveyards in Dadu. “The Muslims do not permit them to bury Oads and Bagris in their graveyards,” he added.

According to Kumar, they have raised the graveyard issue many times but it is yet to be solved.