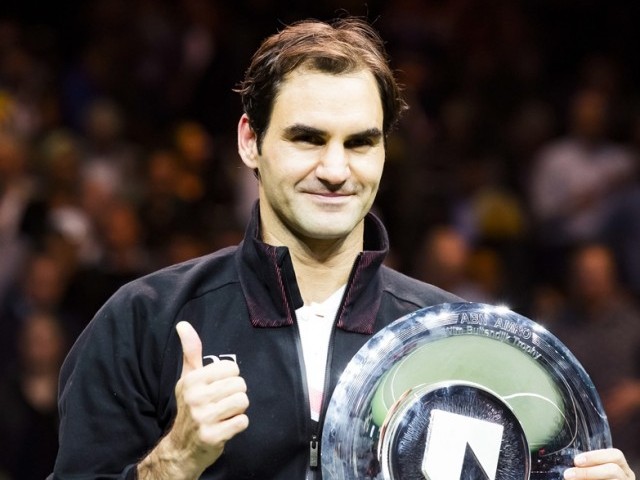 BEST WEEK: Federer became the oldest number one and also won his 97th title, the Rotterdam Open, on Sunday in a week he calls one of the best of his life. PHOTO: AFP

ROTTERDAM: Roger Federer celebrated his return to the top of the world rankings by winning the Rotterdam Open on Sunday, his 97th career title, and declared it “one of the best weeks of my life”.

The 36-year-old, the oldest number one in history, thrashed ailing Bulgarian Grigor Dimitrov 6-2, 6-2 in a one-sided final.

In the Open era, only American Jimmy Connors has won more titles with 109.

“What a fantastic week,” top seed Federer said. “The goal at start of week was to make it to the semi-finals. This is absolutely amazing, I’m really pleased.” “It’s unbelievable to be number one again after all these (six) years — this is one of the best weeks of my life.”

Federer, the record 20-time Grand Slam winner, will officially reclaim the number one ranking he last held in October 2012 when the new ATP rankings are published on Monday.

He has played two tournaments this year and won both — the other being January’s Australian Open which he won for the sixth time.

“I saved the best for last,” added Federer, who has a 12-0 record on the season, before jetting home to his family. “I had a great first match and a great last match. In between it was a battle, it was nerve-wracking getting back to number one. But I was able to manage my nerves and the expectations. I was able to handle that pressure, today I played great from the beginning.”

Federer is three years older than American Andre Agassi was when previously holding the record for oldest number one back in 2003.

As for chasing down Connors’s record of 109 titles, Federer said his first objective was to get to 100.

“97 is not 100 yet, you’ve got to stay healthy if you want to get close to finals. Things can evaporate quickly,” warned Federer.

Sunday was Federer’ third title in Rotterdam following successes in 2005 and 2012 and he now stands 12-0 for the season.

The iconic Swiss star needed just 55 minutes to dispatch Dimitrov who looked to be under-cooked in the quickfire final.

Federer now stands a perfect 7-0 over the Bulgarian in their head-to-head series.