United States has been threat­ening to get tough with Islama­bad over its allege­d ties with milita­nts
By Reuters
Published: February 14, 2018
Tweet Email 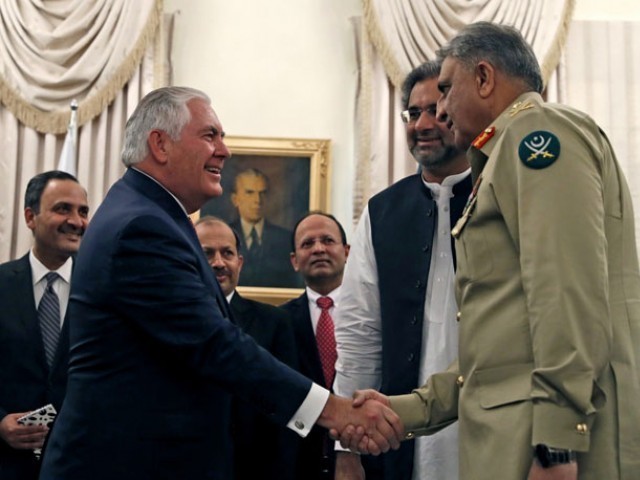 ISLAMABAD: The United States has put forward a motion to place Pakistan on a global terrorist-financing watch-list with an anti-money laundering monitoring group, according to a senior Pakistani official.

Pakistan has been scrambling in recent months to avert being added to a list of countries deemed non-compliant with terrorist financing regulations by the Financial Action Task Force (FATF), a measure officials fear could hurt its economy.

Islamabad denies assisting militants in Afghanistan and India.
A meeting of FATF member states is due to take place next week in Paris, where the organisation could adopt the motion on Pakistan.

Adviser to the Prime Minister on Finance, Miftah Ismail, told Reuters the United States and Britain put forward the motion several weeks ago, and later persuaded France and Germany to co-sponsor it.

“We are now working with the US, UK, Germany and France for the nomination to be withdrawn,” Ismail said, speaking by telephone from Europe. “We are also quite hopeful that even if the US did not withdraw the nomination that we will prevail and not be put on the watch-list.”

Pakistan was previously on the FATF watch-list from 2012 to 2015. A senior US official, who follows US policy in the region, said Pakistan has “always been selective” in cracking down on militants who use its territory as a base.

“It is time for that to stop, and so we are working with our allies, who also are affected, to see effective action against groups such as the Haqqanis and elements of the Taliban,” said the official, referring to militants operating along the border with Afghanistan.

The FATF, an intergovernmental body based in Paris that sets global standards for fighting illicit finance, had previously warned Islamabad it could be put back on the list without further efforts to crack down on the flow of funds to militants.

Pakistani officials and Western diplomats say being put on the FATF watch-list could deal a blow to Pakistan’s economy as it would make it harder for foreign investors and companies to do business in the South Asian nation.

“If you’re put on a terror watch-list, you’re made to go through all the [extra] scrutiny,” Pakistan’s former counterterrorism chief, Khawaja Khalid Farooq, told Reuters. “It can hurt the economy very badly.”

Officials also fear it would be harder and more expensive for Pakistan to borrow money from the international debt markets if it was put on the FATF monitoring list.

US general says ‘not giving up’ on Pakistan ties

Ismail said the FATF motion focused on Hafiz Saeed. That suggested the United States had put forward the motion at India’s behest, he added.

“The US has consistently expressed our longstanding concern about ongoing deficiencies in Pakistan’s implementation of its anti-money laundering and counterterrorism finance regime,” said a spokesperson from the US Embassy in Islamabad.

The United States was “absolutely not” acting on behalf of India in pressing Pakistan on the issue, the spokesperson said. “In addition to broader systemic concerns, this also concerns Pakistan’s non-compliance with its commitments under the UN Security Council Resolution 1267.”

Resolution 1267 requires all states to freeze the assets of people and organisations on a list established by the resolution, including Saeed and his “charities”. Washington has designated Saeed a terrorist.
Saeed has repeatedly denied involvement in the Mumbai attacks and says the charitable organisations he founded and controls have no ties with militants.

On Monday, Pakistan announced it had amended its anti-terrorism law to ban militant groups and organisations that are listed as “terrorists” by the United Nations, a move seen to be targeting those charities.

Attorney General Ashtar Ausaf said the law changes were meant to reflect obligations under the UN Security Council charter. “We have to march with the changing times,” Ausaf said, adding that the new laws would enable the government to track fundraising activities of all the UN-proscribed groups and take punitive action such as freezing their assets.

In December, the Pakistan government drew up plans to seize control of Hafiz Saeed’s Jamaatud-Dawa (JuD) and the Falah-e-Insaniat Foundation charities. Critics say previous such efforts have faded once pressure on Pakistan eased.

Ismail said Pakistan had already taken over some parts of Saeed’s organisations and that he believed other FATF nations would recognise Pakistan had made serious efforts to deal with militant financing.

He added that moves to put Islamabad on the FATF watch-list were counter-productive when Pakistan was already undergoing “mutual evaluation” by experts from other countries, who are measuring progress in curbing illicit fund flows.

“It’s a very intrusive process and…we are happy to work with them, but while we are being given mutual evaluation, it makes no sense for us to be now put on the watch-list,” Ismail said.

Pakistan will give a befitting reply to any conspiracy hatched against its interests, says Ahsan Iqbal