'Everyone is allowed an opinion but not to manipulate facts'

'Everyone is allowed an opinion but not to manipulate facts' 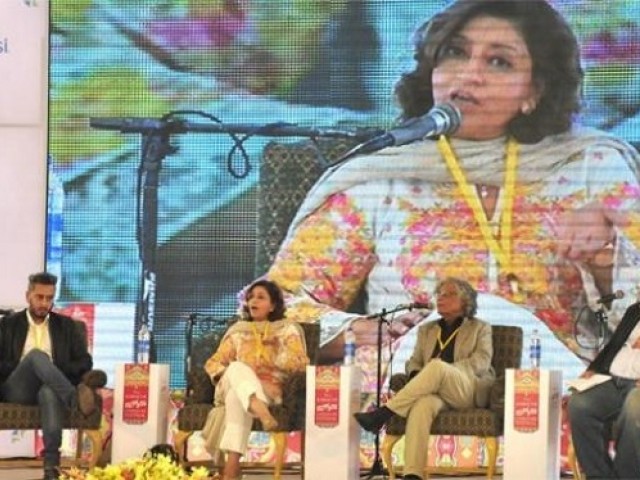 KARACHI: The talk ‘Making and Breaking the News’, featuring journalist Ghazi Salahuddin, anchor and analyst Huma Baqai, Fasi Zaka and BBC’s Pakistan correspondent Secunder Kermani was the highlight of the second day of the Karachi Literature Festival (KLF). The media professionals argued on crucial news topics that have created waves all over the country.

The session began with a discussion on the element of competition within different media organisations to be the first ones to ‘break’ the news. “There is a race of ratings among news channels,” said Baqai. “There are many channels and they are super competitive. A large part of the media is free, they have the freedom to grill politicians,” said Kermani.

He also spoke about the way in which media personnel behaved with father of minor Zainab who was raped and murdered in Kasur. “The way Zainab’s father was being treated was awful. He was being treated like a puppet,” he said.

Baqai spoke at length about the way in which the media was severely impacted by ‘unleashed capitalism’ and how media channels now have powerhouses backing them that reinforce hidden ‘agendas’. “I joined PTV as an anchor in General Musharraf’s tenure. I was a liberal woman who spoke freely and when Nawaz Sharif’s government took over I was sacked, whether or not that was because of the change in government is still under debate,” she scoffed.

While Baqai viewed social media as a tool of ‘compromised content’, Kermani felt that it was a positive agent of social change. “The cases of Zainab and Naqeebullah were highlighted on social media – they gained importance through that. The desire to be the first, the first ones there with all details has fuelled it,” he added.

Baqai’s counter argument was that due to the inclusion of social media in mainstream media, the content has been trimmed and the integrity compromised.

Salahuddin spoke about the issues of accountability in the media. According to him, the multiplicity of news channels and media organisations resulted in massive opinion making. “Everyone is allowed an opinion, but not to manipulate facts,” he said. “There is no institutional accountability for Pakistan’s media,” he lamented, as the audience applauded. “People are drawn to conspiracy theories, rumours and hearsay,” he added.

The discussion then delved into the problems surrounding regulation. “The desire of the state to control narrative has spread beyond TV,” Baqai said. “Often, anchors forget their ethics and morality at home when coming into the newsroom.”

Kermani was of the view that there is accountability of the news in multiple countries and it can be in the form of the government and other regulatory bodies as well. “Transparency is very low in Pakistan. It is important to point out sources, clear up allegations with facts, back up your claims and do fact-checking,” he said.

Referring to the famous Dawn leaks, Salahuddin said that the journalist and staff involved in the Dawn leaks refused to give up the names of their sources, and when there can be no such accountability, how can there be regulation, he questioned.

Perhaps the part that deserved the most applause was when Baqai fearlessly said, “You know someone or something has power when people are afraid to talk about them. We are afraid to talk about the army, about extremists and about terrorists and this needs to be addressed,” she said as the audience roared in applause. To which, Salahuddin added, “In Pakistan, you can’t be a good reporter unless you have contacts in the agencies, it’s true.”

The panel concluded with a joyful response from the audience who were surprised at the social issues that were discussed and the freedom with which they were spoken about. As Kermani put it, “Pakistan’s media is largely free. It’s time to implement positive regulation.”