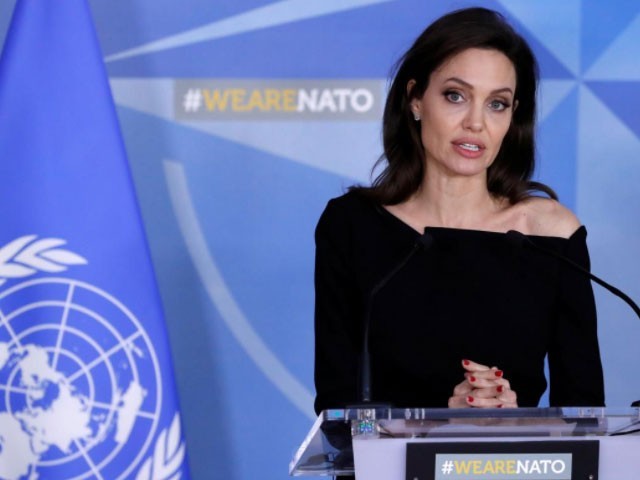 BRUSSELS: UN refugee agency special envoy Angelina Jolie called on NATO on Wednesday to help stop the use of sexual violence as a weapon of war, as the Hollywood star broadened her international efforts to protect women’s rights.

Jolie, who earlier this week visited a Syrian refugee camp in Jordan, made her appeal to the US-led alliance’s top decision-making body, the North Atlantic Council, in Brussels, and later met NATO military commanders.

“Violence against women and children, particularly sexual violence, is an increasing feature of conflict,” Jolie told a news conference at NATO headquarters alongside the alliance’s Secretary-General Jens Stoltenberg.

“This is rape used as a weapon to achieve military or political goals. It affects men and boys as well as women and girls,” Jolie said.

NATO, which counts 29 members and has missions from Kosovo to Afghanistan, has agreed to help report on sexual violence in war to help bring perpetrators to justice and challenge the idea that rape is an unavoidable aspect of conflict.

Jolie, a mother of six who last year released her film First They Killed My Father about Cambodia’s Khmer Rouge regime in the 1970s, said she had met victims of sexual violence in conflict and was trying to be a voice for them.

Expressing frustration at the lack of assistance available to victims, Jolie said she hoped that NATO could help by raising standards in other militaries through its training programmes abroad, as well as promoting the role of women in the military.

Jolie singled out the plight of Rohingya refugees fleeing violence in Myanmar and what she said was the inadequate response of many governments around the world.

“We should all hang our head on how little we have been able to do,” she added.

With some 65 million people forced from their homes by conflict as of the end of 2016, Jolie said the sheer scale of the refugee crisis worldwide felt overwhelming.

In case you missed it: ‘Super Blue Blood Moon’ in pictures