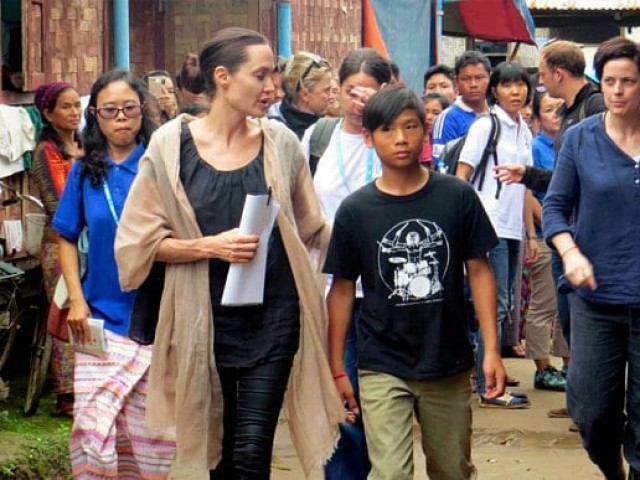 Angelina and her son Pax at a refugee camp in Myanmar. PHOTO: ONLINE

DHAKA: Film star Angelina Jolie has condemned sexual violence inflicted on Rohingya women in Myanmar’s Rakhine State, where a military counter-insurgency operation has sent hundreds of thousands of Rohingya Muslim refugees across the border to Bangladesh.

More than 600,000 Rohingya Muslims have fled Buddhist-majority Myanmar since late August, driven out by the military’s actions that a top United Nations official has described as a classic case of “ethnic cleansing”.

Jolie, a special envoy of the United Nations High Commissioner for Refugees (UNHCR), told a Bangladesh delegation in the Canadian city of Vancouver that she planned to visit the Rohingya victims of sexual violence.

“Later she mentioned accordingly in her keynote speech about the sexual violence faced by almost each female Rohingya who fled to Bangladesh and condemned the armed conflict in Myanmar,” Bangladesh’s foreign ministry said in a statement on Thursday.  It gave no details of Jolie’s proposed trip.

On Thursday, New York based Human Rights Watch accused Myanmar security forces of committing widespread rape against women and girls as part of a campaign of ethnic cleansing.

The allegation echoes an accusation this week by Pramila Patten, the UN special envoy on sexual violence in conflict, who said sexual violence was “being commanded, orchestrated and perpetrated by the Armed Forces of Myanmar.”

Myanmar’s army released a report on Monday denying all allegations of rape and killings by security forces, days after replacing the general in charge of the operation.

In parliament on Wednesday, Prime Minister Sheikh Hasina said Bangladesh would overcome obstacles to resolve the Rohingya crisis, with the help of the international community.

“I strongly believe we will find a peaceful solution to the unprecedented crisis with the help of the international community, despite various obstacles,” she said.

There were already about 300,000 Rohingya refugees in Bangladesh before the most recent exodus.