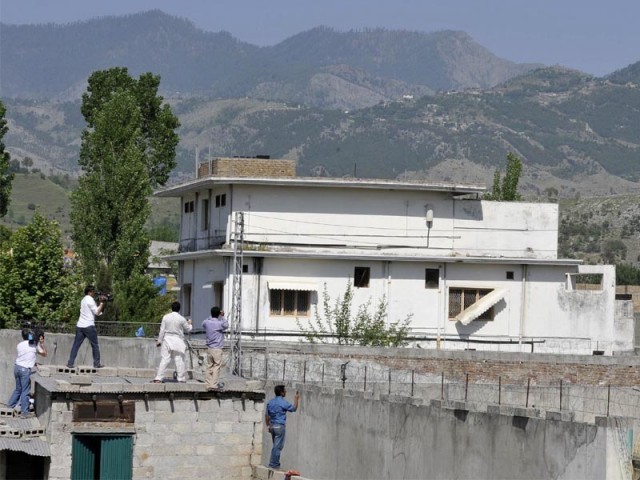 Pakistani media personnel film the building which was used as the hideout by Osama bin Laden. PHOTO:AFP

Some women and children, said to be the family members of al Qaeda founder Osama bin Laden, are admitted at the Combined Military Hospitals in Rawalpindi and Abbottabad, reliable sources told The Express Tribune.

They were brought to the hospitals by security officials after they were injured during the operation at Bin Laden’s residence in Abbottabad, the source said requesting anonymity.

“They are being treated in the isolation ward under extraordinary security arrangements,”  the source said, adding that no visitor is allowed to meet them except for a few security officials, who visited them twice yesterday.

Further details could not be ascertained as doctors treating the women and children are not permitted to interact with an outsider.

A security official told The Express Tribune that US forces had left the injured people after completing the midnight operation. One of the women was found in critical condition when Pakistani security personnel entered the compound.

She was shot by an automatic weapon, the official said, adding that she was initially taken to CMH Abbottabad, but shifted to CMH Rawalpindi on the advice of some physicians.

Doctors and nurses treating the patients have strictly been forbidden to speak to these people, who have been declared by the hospital administration as VVIP patients.

The security official did not say whether he also found a body from the compound. However, he said that further details about the injured or dead were highly confidential.

Few bodies were also brought to the CMH Abbottabad, but it cannot be told whether they were recovered from the same residence, the official said.