Unsafe haven: Why was Abbottabad the final destination?

Unsafe haven: Why was Abbottabad the final destination?

Nobody expect­ed Osama to be in Abbott­abad – a virtua­lly milita­ry-contro­lled city.
By Zia Khan
Published: May 3, 2011
Tweet Email 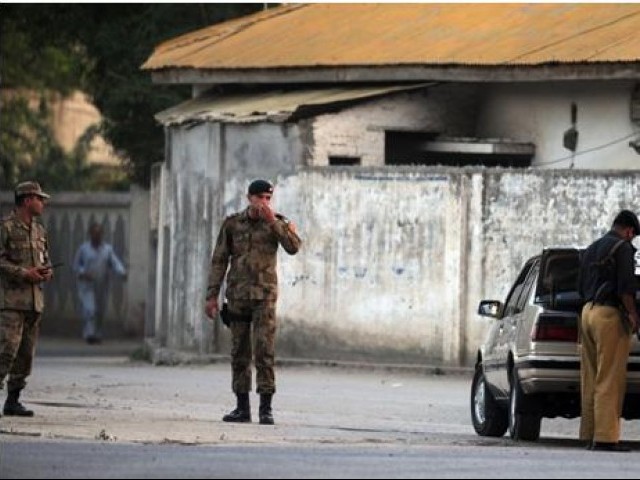 Pakistani soldiers and police officials keep vigil near a building the hideout of Al-Qaeda leader Osama bin Laden after his death by US Special Forces in a ground operation in Abbottabad on May 2, 2011. PHOTO: AFP

ISLAMABAD: Although there have been a lot of speculation about Osama Bin Laden’s presence in Pakistan after the American invasion of Afghanistan following 9/11, nobody expected him to be in Abbottabad – a virtually military-controlled city.

Since his famous escape from Tora Bora back in 2001, the terror icon has been hiding in various mountainous regions along with the porous border between Pakistan and Afghanistan, although there isn’t any reliable trail of his underground life.

The Afghan Kunar province – an area close to the Tora Bora peaks – was reportedly the first place that hosted Osama Bin Laden for some years since the fugitive Taliban regime was driven out from the country by international forces.

It is not clear who his facilitators in Kunar were but the region is known to be one of the few Afghan provinces where most militants follow the al-Hadith school of thought – close to the Takfiri ideology that al Qaeda believes in.

Osama Bin Laden then moved into neighbouring Nuristan province – along with the border of Chitral district. Associates of the group, Commander Mujtaba and Usman, told this scribe back in the summer of 2009 that they had been hosting Osama for some time. They were not, however, aware of his whereabouts at the time.

His next hideout was Chitral where people in Banduk and Shangrum valleys in the foothills of Trichmir Mountain said they often heard of Bin Laden’s presence in their areas, although no one claimed to have actually seen him.

Bajaur tribal agency is another place where al Qaeda’s founding father has been living for several months, if not years.

Insiders say that Osama’s stay in Bajaur was his longest in Pakistan, making the region al Qaeda’s hotbed before the Taliban captured Waziristan. However, according to Pakistani Taliban’s top leader Hakimullah Mehsud, Osama’s last destination inside Pakistan was North Waziristan.

“He was in North Waziristan last year,” Mehsud had told a reporter in an interview earlier this year.

How and why Bin Laden moved to Abbottabad remains a mystery. Whether there was some sort of assurance for his safety in the region is something to probe about.