Says CPEC is turnin­g into a realit­y today which will change the fate of the region­
By Mohammad Zafar
Published: January 29, 2018
Tweet Email 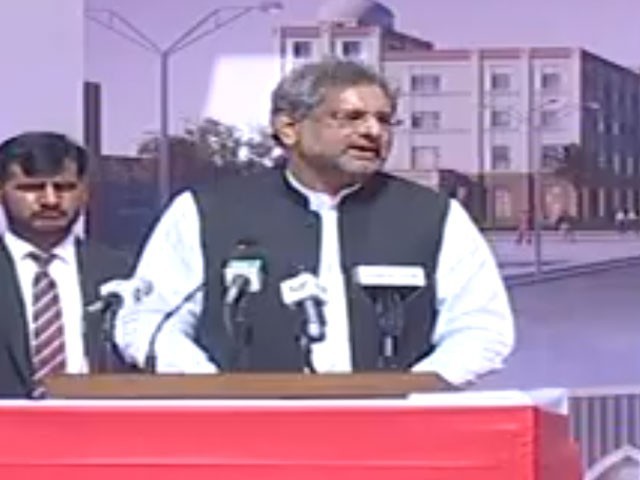 QUETTA: Prime Minister Shahid Khaqan Abbasi has told the Balochistan government to draw plans for the development of the coastal areas of the province and promised federal government’s full cooperation in this regard.

Addressing the opening ceremony of the two-day Gwadar Expo in Gwadar, the prime minister announced an ‘Equalisation Package’ for Balochistan under which the federal government would provide 50% funding for development works in every district of the province.

“[A] free zone is an integral part of the Gwadar port and with it, the Gwadar port project will pave the way for the speedy development of Balochistan and create ample jobs opportunities,” Prime Minister Abbasi told the ceremony.

“The Equalisation Package will ensure the provision of equal facilities in all districts of the province to achieve the goal of sustainable development,” he said.

The PM said it was incumbent upon the Balochistan government to find solutions to its problems and meet the challenges. As far as federal government was concern, he added, it would provide all help and facilities to the province.

He described the China-Pakistan Economic Corridor (CPEC) as “the most important initiative of our generation and the most visible part of the Belt and Road Initiative”. He added the project was the realisation of the vision of Chinese President Xi Jinping and former prime minister Nawaz Sharif.

“The CPEC is a reality now,” Abbasi said, adding that under the project, motorways and highways were linking Gwadar and Khanjrab and Peshawar and Karachi. He added that railway lines were being modernised, power projects were being established and special economic zones would generate employment.

The Gwadar Expo is being jointly organised by the Gwadar Development Authority and the China Overseas Ports Holding Company (COPHC). It aimed at providing a platform for interaction between local, foreign private sector and government officials for exploring investment opportunities.

On the occasion, Chinese Ambassador to Pakistan Yao Jing reaffirmed his country’s support for Pakistan for its progress and prosperity. “Chinese businessmen will continue to invest in the developmental projects of Gwadar,” he said.

COPHC Chairman Zhang said the development of Gwadar would not only help improve the local economy but also the overall economic conditions of the country.

Misunderstandings with US to subside soon: Aizaz Chaudhry