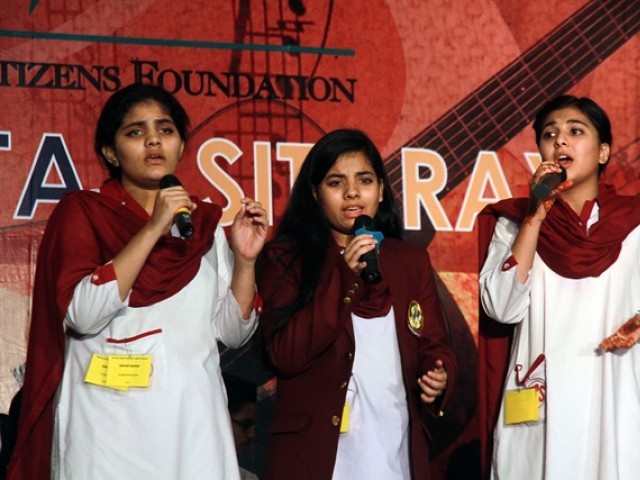 A group from The City School (Gulshan) performing at the Obhartay Sitaray finale. PHOTO: ATHAR KHAN/EXPRESS

The finale of Obhartay Sitaray 2018, The Citizen Foundation’s (TCF) inter-school singing competition, ended on a high note on Saturday.

The competition provides a platform for students to showcase their talents and raise funds for underprivileged children studying at the foundation’s schools. United States Consul-General Grace Shelton was chief guest at the event.

This year’s event featured more than 629 students in 277 teams from 120 schools competing in the singing rounds.

“At TCF, we believe that education has to be more holistic than just textbook studies. Obhartay Sitaray brings TCF children and private school children on the same platform and I think that is a true reflection of our mission to remove the barriers of class and privilege,” said TCF Chairperson and Cofounder Ateed Riaz. “You see these bright children of private schools sharing the stage with TCF children and you cannot help but see a brilliant future for our country.”

Obhartay Sitaray Project Lead Biba Basir expressed her gratitude to the students and partnering schools for participating and collecting funds.

The winners of Obhartay Sitaray 2018 pop genre and milli naghma genre awards are Tarab Nafees of The Hampton School and Nida Fatima of Beaconhouse School System (BSS) in the primary level, BSS students Sakina Haider and Ali Abbas in the secondary level. College level winners are Khillat Zehra in the ghazal genre, Natasha Rasool in the milli naghma genre and Zuha Adnan in the pop genre. All the college level winners are from Nixor College.