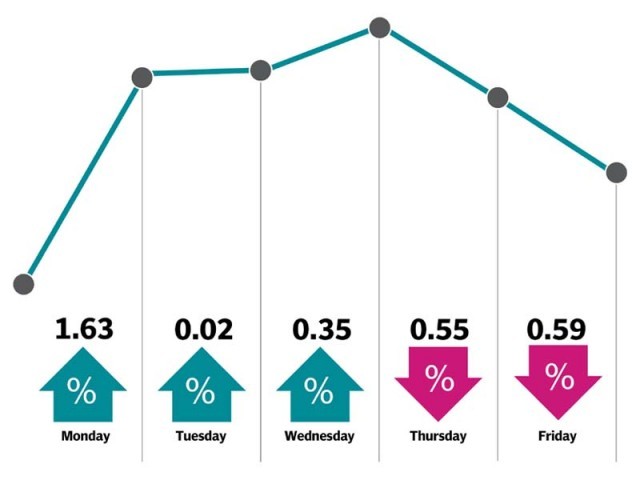 KARACHI: The stock market continued to witness bullish momentum for the fourth straight week, as the KSE-100 index closed 372 points or 0.84% higher to settle at the 44,551 level.

Strong foreign buying in cements and banking sectors helped the benchmark index move higher as it managed to cross the 45,000 barrier during the week – the highest level seen since August last year.

With the State Bank of Pakistan (SBP) deciding to increase the key interest rate to 6%, banking stocks are expected to see further bullish momentum.

The week kicked off on a positive note as the KSE-100 continued to build on gains made during the preceding session. The rally continued for three days, adding 884 points to the index, as lack of negative triggers and foreign buying kept investors’ interest alive.

The winning streak came to an end as Thursday and Friday saw the index tumble into the red zone. The selling pressure was due to the last week of rollovers and foreign selling. Moreover, Fitch’s revised outlook on Pakistan also aggravated matters as investors resorted to book profits.

The volatility at the bourse helped increase overall activity as average daily turnover increased 50% to 275 million share, whereas traded value rose 45% to $115 million.

In terms of stocks, pressure to the downside in banks was led by UBL and HBL by contributing 109 points and 79 points to the index, respectively. Pakistan Oilfields (down 7.9% week-on-week) announced lower-than-expected earnings for 1HFY18 due to conflict with the government over imposition of Windfall Levy, which is expected to impact other companies in the sector as well.

Foreigners accumulated $12.44 million this week compared to last week’s net purchase worth $33.11 million. On the local front, selling was witnessed by companies and banks/DFI of $13.89 million and $13.67 million, respectively. On the other hand, individuals also supported foreigners and accumulated stocks amounting to $24.78 million.