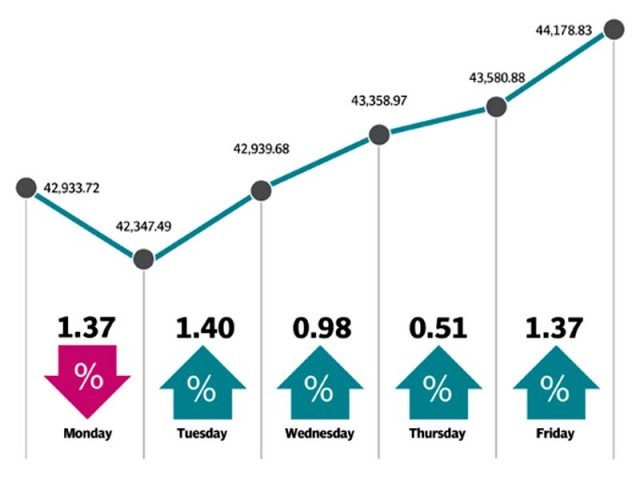 KARACHI: A bullish wave engulfed Pakistan’s stock market as the KSE-100 Index ended positive in four of the five sessions during the week with foreigners continuing to be net buyers.

The KSE-100 remained choppy at the start of the week as investors were jittery on account of protest planned by the joint opposition parties to pressure the ruling government. However, a rather underwhelming show revived investor sentiment, resulting in a strong rally later. Prime Minister Shahid Khaqan Abbasi’s announcement that premature dissolution of any provincial assembly would not affect the Senate election helped allay concerns as well. Participants were further encouraged by expectations of a hike in interest rate and WTI crude oil trading around $64/bbl.

“Pertinently, this year has turned out surprisingly well with investors tossing the KSE-100 index higher to achieve 11 positive sessions out of the 15 trading days in January 2018, which has cumulatively added 3,707 points or 9.2% to the index,” stated AHL Research in a note to clients.

Compared to the previous week, participation saw a dip as average volumes decreased 33% to 184 million shares, while value declined 28% to $80 million. In terms of sectors, the index was driven by banks, cements, fertilisers and autos, which contributed 864 points, cumulatively.

Banks returned 2.6% week-on-week led by increase in expectation of higher inflation owing to rupee depreciation and resultant increase in interest rates. However, the real thrust came from foreign buying, which was largely concentrated in banks, followed by cements.

Cements gained 6.4% week-on-week on the back of Supreme Court’s allowance of multi-storey buildings (up to six-storeys) in Karachi and continued regulatory delays on cement expansions in Punjab.

Autos returned 5.7% week-on-week on regulatory controls on automobile imports under gifts scheme, which can significantly add to demand for locally assembled players.

Negative contribution during the week came from refineries, which took away 27 points from the index.

Foreign buying continued this week, following rupee’s devaluation. FIPI’s month-to-date cumulative buying has clocked in at $82.5 million, surpassing foreign flows last seen back in April 2014. Foreigners bought $33 million worth of shares during the week versus buying of $26 million during the last week. On the local front, mutual funds were net sellers of $12.8 million whereas individuals were net sellers of $10.1 million.

Among major highlight’s of the week were; PM Abbasi announced an amnesty scheme for foreign assets, hefty participation of Rs1 trillion in T-Bills auction with no bids for 6-month and 12-months papers, FDI declined by 2.8% year-on-year to $1.38 billion and foreign reserves slipped below $14 billion.

National Refinery Ltd manufactures and distributes lube base oils and petroleum fuels. The company markets its products to customers throughout Pakistan.