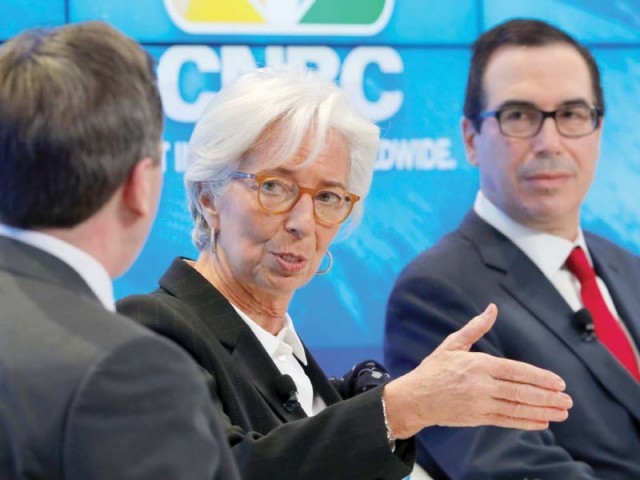 The depreciation of the US currency would make the British pound sterling and euro more expensive. The euro has already climbed to its strongest against the dollar since 2014. PHOTO: REUTERS

SWITZERLAND / DAVOS: As the US raises prospects of entering into a ‘currency war’ with China, Pakistan is likely to face new challenges of further losing its competitiveness in the global market, while also witnessing further pressure on its import bill.

In order to improve its trade balance with China, the US, led by its mercurial president Donald Trump, has implicitly decided to allow its currency to weaken. The move is aimed at making its products cheaper and competitive in the global market, a place dominated by Chinese merchandise. While China is not one to sit out, a currency war likely seems to be on the cards, carrying far-reaching implications for the global economy, including Pakistan.

The dollar saw its worst day since March 2016, after Treasury Secretary Steven Mnuchin said a weak dollar would help US trade.

The dollar index, which reflects the greenback against a basket of currencies, fell 1% to the lowest level since December 2014, according to the CNBC.

Mnuchin spoke at the World Economic Forum (WEF) during a session on ‘Remaking of the Global Finances’, stating that a weak dollar is good for the US.

He said that he spends little time thinking about dollar’s weakness over the short-term. “In the longer term, we fundamentally believe in the strength of the dollar,” he added.

Speaking during a CNBC-moderated panel at the WEF in Davos, Mnuchin said dollar weakness in the short-term was “not a concern of ours”.

He further said that while he acknowledged the greenback’s weakness in the short-term would create issues for some, it would be “beneficial” for some US trade imbalances.

The US currently faces a trade deficit of over $43 billion as on November 2017, putting pressure on its foreign currency reserves that are hovering over the $120-billion mark.

The comments are also seen as a departure from the past three presidential administrations and Treasury secretaries.

The depreciation of the US currency would make the British Sterling Pound and Euro more expensive. The euro has already climbed to its strongest against the dollar since 2014.

Since Pakistani exporters price their goods in dollar terms, they would lose the competitive edge in the British and European Union markets. Not only that, the depreciation of the rupee versus other currencies would make international commodities more expensive that will further increase Pakistan’s import bill.

LNG imports would also get expensive as the price of crude oil goes north.

In case, Pakistan depreciates its currency to make it competitive, this will increase its debt burden.

“Pakistan’s debt will increase in dollar terms if the currency war goes too far,” said Dr Ashfaque Hasan, a noted economist and dean at the National University of Sciences and Technology. “When the dollar loses value, we will import more and our import bill will increase further. This will also put renewed pressure on the rupee.

“Our exporters will also find it difficult to increase their earnings.”

While speaking at the occasion, International Monetary Fund (IMF) Managing Director Christine Lagarde said that currently, the global economy was standing at a sweet spot. The global economy growth is moving at a pretty solid rate of around 3.9% and this momentum is expected to continue next year as well. About 120 countries have seen growth in per capita income during the last one year, she added.

The financial conditions are reasonably accessible and the engines of global growth are the investment and the growth in international trade, said the MD, adding that international trade is growing at a faster rate than the global economic growth rate.

“So any measure that would slow down the global growth rate, that would try to limit the strength of this engine, would obviously be a matter of concern for the IMF,” said Lagarde.

To a question whether the IMF agrees with tariff escalation by the US, Lagarde said that no one would agree with measures that restrict growth.

The US treasury secretary, Mnuchin, said that the US wanted reciprocal fair trade, adding that productive conversations have been held with China on free trade, increasing exports and participation of US companies in China in an open and fair manner.