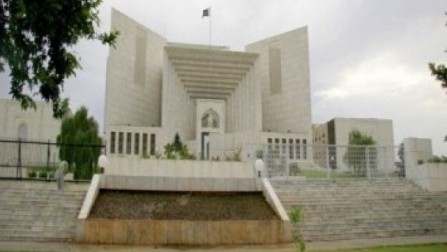 Says the amendment violates the Constitution.

ISLAMABAD: One of the architects of the 1973 constitution, Barrister Abdul Hafeez Pirzada, on Tuesday filed a constitutional petition in the Supreme Court seeking a review of the 18th Amendment.

The amendment was unanimously passed by both houses of parliament last month. The petition was filed under Article 248 of the 1973 Constitution. The federation of Pakistan through the Ministry of Law and Justice has been made the respondent in the petition. Advocate M S Khattak filed the petition on behalf of the petitioner.

The petitioner also asked the apex court to club his petition with fifteen other petitions being heard by a 17-member bench of the apex court. “The impugned legislation leading to a constitutional amendment is the violation of Articles 17, 19 or 25 of the 1973 Constitution, which relate to fundamental rights. It cannot be passed by the Parliament in derogation of the clear restrictions imposed by Article 8 (2) on the power of the state to pass any law,” Pirzada told The Express Tribune.

Pirzada also told The Express Tribune that the Australian electorate had approved only five out of 32 changes in the constitution proposed by their Parliament in the last 95 years. “At the end of 1973 the Australian Parliament passed by an impressive majority two proposals for constitutional amendments, but both the proposals were rejected by equally impressive majorities by the people in every single state in Australia,” he said. On Monday the Supreme Court sought transcripts of the nine-month deliberations of the parliamentary committee which hammered out the 18th Constitutional Amendment and the subsequent debate in the National Assembly which adopted it unanimously.