Malala reiter­ates the need for women to stand up for their rights and never be afraid to voice their opinio­ns
By News Desk
Published: January 25, 2018
Tweet Email 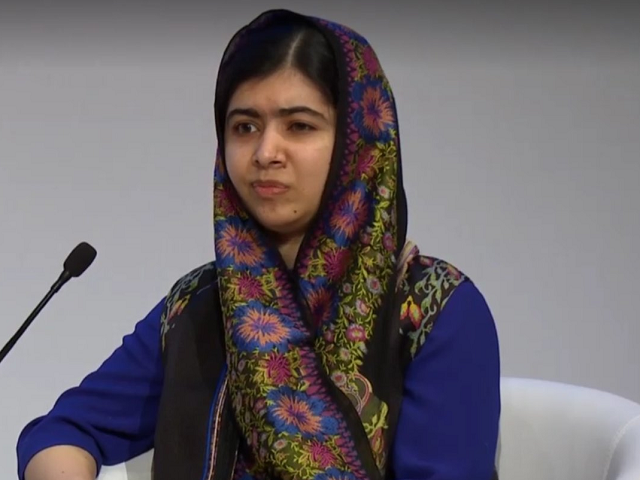 Education activist, Nobel Peace laureate Malala Yousufzai who survived being shot by the Taliban shared her views on Thursday at the World Economic Forum in Davos saying it is a collective responsibility to ensure girls get education globally.

Kicking off the talk, Malala explained her views on feminism saying that initially, she would come across the term as maybe women being superior but that was laid to rest when she truly understood that it just stands for equal opportunities for women. “No one should object equality. Its very simple, it’s not as complicated as people have made it. And then I embraced feminism, when you speak about women’s rights, you become a feminist,” she noted.

This movement of equality is building up worldwide. First, we wanted men to do something for us but that time has gone now, we are going to stand up for ourselves, raise our voices and change the world.

“I would really encourage girls to speak up against violence in their society,” the young activist remarked.

Education is really important, it is about how we teach our children about rights and equality. This is how the mind of a child builds up later one. Education can play a key role in giving the message of equality.

When asked about what Trump’s views are on equality (or lack of it), Malala said, “I get disappointed to see that people are at such high positions and they don’t accept women as equal, and it is shocking to see that they are involved in such shameful acts. I’ll try all my best to give advice but I can’t change a person.”

Apple partners with Malala Fund to fight for girls’ education

Talking about life at Oxford as a student, she said she has to manage time and she has to strike a balance between work and extracurricular. “I gave up two days of university but I know how important it is to impart the message hence I am here,” she said.

Malala stated that war has severely affected children, it has stopped children from achieving their dreams and it is important for everyone to invest in them. “Imagine for a second that you don’t have a voice of your own — we have to protect them (children) as individuals and be their voice.”

I know it is not one person’s job to ensure that girls go to school, it is not humanly possible — but what is under my potential I will do it. It is just reminding everyone that they can all play a role in this, its a responsibility that we should all realise and take forward. You want to change the world in a day but it is not possible but you can always start from somewhere, she said.

When asked where she draws inspiration from, she said that ‘The Alchemist’ helped her stay hopeful and positive and made sure she keeps going.

“I want to inspire children and tell them that they can change the world. Girls education is important to me because when I was 11-years-old, Taliban announced that no girl can go to school. It is important to tell children that education is not just about doing homework, it is more than that. It is about standing up for one’s rights. Extremists are not threatened by books, they are threatened by education because they know the importance of education which is why they stop women from going to school. For women to go outside, education is harder for women in patriarchal society,” Malala said.

Reiterating the importance of critical thinking she said that it is crucial to think and go beyond what’s happening every day and learn how to think for yourselves.

Malala conclusively stated that its important for young boys to ‘accept’ their sisters and young girls can make their own decisions and to be comfortable with the fact that women will have a voice over their own matters, always.