How Egyptians are dominating squash

How Egyptians are dominating squash

Six of the world's top 10 male player­s are Egypti­an, while four Egypti­an women are in the women's top 10
By AFP
Published: January 25, 2018
Tweet Email 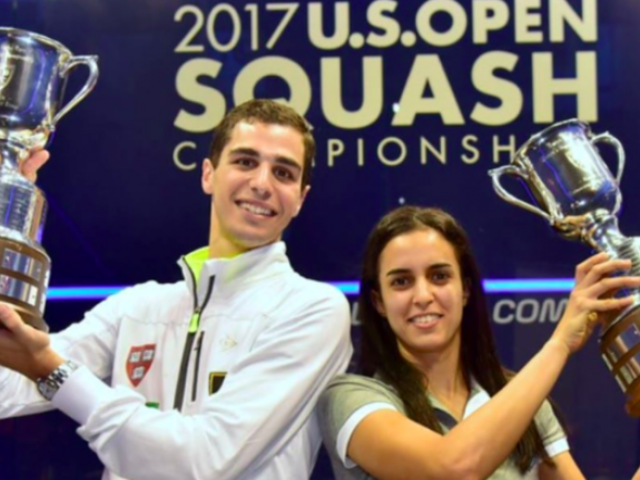 CAIRO: Egyptian squash players are dominating the sport globally, with coaches and their opponents saying their tight-knit community and freer training techniques have given them a competitive edge.

Six of the world’s top 10 male players are Egyptian, while four Egyptian women are in the women’s top 10.

The current world No. 1 is France’s Gregory Gaultier, but the four players after him in the rankings are all Egyptian.

Alan Thatcher, editor and publisher of the website Squash Mad, said not only do they “hit winners”, Egyptians had introduced a more dynamic style of squash that is “amazingly entertaining”.

“The old style of game was about the long attritional rallies, hundreds of shots, up and down the side wall, but now largely thanks to the Egyptians you’re seeing a new style of squash: attacking squash,” said Thatcher.

This wave of success was boosted with local icon Ahmed Barada’s successes at Al-Ahram International Championship – which from 1996 to 2001 was held with the stunning backdrop of the Giza pyramids. He reached the final in 1996, and took the title in 1998.

“This was a big shift for us, to believe that we can become champions,” said former World No. 1 Karim Darwish.

Barada retired at 24, but his successes inspired others, including four-time World Champion Amr Shabana, the first Egyptian to reach No. 1 in 2006.

Squash players strategize using the court’s four walls and get incredible speed from the rubber ball, whose fastest recorded speed – by Squash Mad – is 178 miles per hour.

Shabana compared it to driving in Cairo’s sometimes chaotic streets.

“It’s like our driving: Under pressure, our decision-making process is very sharp,” said Shabana.

Fewer training restrictions allow players to develop their own style, said Shabana, who retired at 36 and is now advising current Egyptian players.

“We must teach the juniors the sport’s proper basics… but then we give them space for creativity,” said Darwish, who took the No. 1 title from Shabana in 2009, now leading Egypt’s largest squash academy at Wadi Degla club.

Egyptians had previous international success in the sport, which was introduced by the British occupiers in the 1930s, though the seeds of this current era of domination were planted in the 1990s.

It came following and as a result of a slump in the game in Egypt in the 1970s, said Shabana.

Lacking enough players, juniors competed with men, and men with women, to fill tournaments, pushing everyone to improve at a younger age, said Shabana, who himself played in men’s tournaments when he was just 12.

“We have a squash tournament every two weeks,” said women’s No. 5 Nouran Gohar.

Even in training, “you’re playing against the best of the best outside of tournaments,” said Rod Gilmour, co-author of Jahangir Khan:555.

Not only do they train together, the community has several married couples.

“We had Amr Shabana, Karim Darwish, and Ramy Ashour, who never spared any advice, always training with us, helping us improve,” said Farag, adding theirs is a “close-knit community”.

Among the players, a top crowd-pleaser is Ramy Ashour, who was world champion in 2008, 2012, and 2014, although injuries have taken their toll in the last few years.

“He is without doubt the most popular player in the world… so many people buy tickets in major tournaments hoping to see Ramy and then he’s unable to play,” said Thatcher.

Egyptian female players “are the reason that the game is as attacking as it is, because if you can’t play at the front of the court now as a female player then you’re just going to get taken apart.”