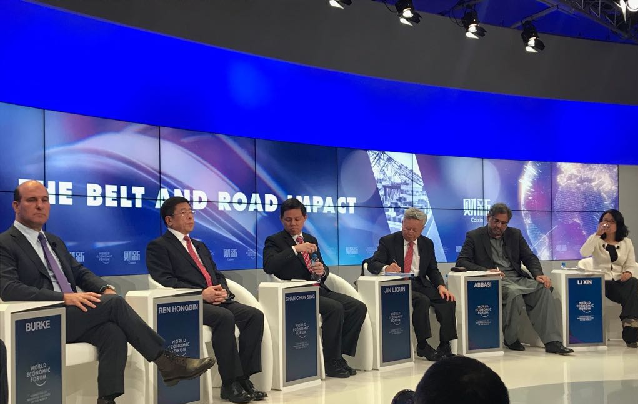 Prime Minister Shahid Khaqan Abbasi on Wednesday assured the world community that the China-Pakistan Economic Corridor projects would be financially and environmentally sustainable and would be open to all for investment.

“We will ensure that these projects do not create distortions and will be inclusive and open to all,” said PM Abbasi while speaking at a panel discussion on the ‘Belt and Road Impact’.

The panel discussion took place during the second day of the 48 Annual Meeting of the World Economic Forum, which is taking place at Davos.

There was greater enthusiasm among the panelists and the audience about the opportunities that the Belt and Road Initiative offers to the Euro-Asian countries.

CPEC is an integral part of China’s strategic initiative that promises shared prosperity to all the participating nations.

The prime minister did emphasise that the BRI must contribute towards local community and assure job creation.

He said that CPEC has enabled Pakistani contractors to undertake mega road infrastructure projects, which was not possible five years ago.

The BRI initiative is perfectly linked with the 2018 WEF theme of “shared future in a fractured world”, said the prime minister.

Abbasi said that the BRI is indeed about creating shared future among the participant countries.

“Pakistan is the integral part of the BRI,” Abbasi said, adding, “BRI is much more than infrastructure projects.”

“With the help of the Belt and Road initiative, Pakistan has gained investors’ confidence to a great extent and investment is also coming outside the CPEC projects.”

The prime minister also assured that the CPEC projects will be financially viable and environmentally sustainable.

He said the roads and ports connectivity provide greater opportunity to landlocked Central Asia to connect with the rest of the world.

“Pakistan through its port development can provide much more efficient connectivity to most of Central Asia. Complementary policies and greater utilisation of resources will eventually create much greater financial stability,” he said.

The efficiency gains from the clean energy and infrastructure building outpaced the cost of the CPEC projects, added the prime minister.

Abbasi said it was imperative that those projects remain inclusive.

“Of course, there are bilateral constraints but they should be available to local players,” he stated.

Asian Infrastructure Investment Bank (AIIB) President Jin Liqun underlined that his bank would finance only those projects of the BRI that are financially viable, environmentally sustainable and more importantly the local community own them.

“The AIIB will not finance the white elephant projects,” said Liqun.

He said there were 48 AIIB member countries and all of them fall on the BRI; therefore, were natural partners.

Liqun said that even though the US was not a member of the BRI, the AIIB was engaging with the US companies.

Russian Direct Investment Fund CEO Kirill Dmitriev said that the BRI was a solution to the fractured world. He said that the Chinese strategic initiative has offered tremendous opportunities to the Euro-Asian countries.

AECOM CEO and Chairman Michael Burke said that the 60% population of the world was living in the region of the BRI and the largest ever infrastructure projects in the world history would provide greater opportunities to these countries to address their infrastructure deficiencies.

But Burke said that the size and scale of the BRI suggests that no single country can meet these huge obligations and there is a need of collaboration.

Singapore Minister Chan Chun Sing said that the BRI will not only address connectivity issues in the short term but will also capitalise the economy of the participating nations.

“China is helping the world to a common destiny for mankind, this will be a tremendous opportunity for China to show the kind of power it wants to be in the next economic phase,” a panelist added during the discussion.

“Zainab’s murderer should be hanged publicly, be made an example of”: Rehman Malik to Senate