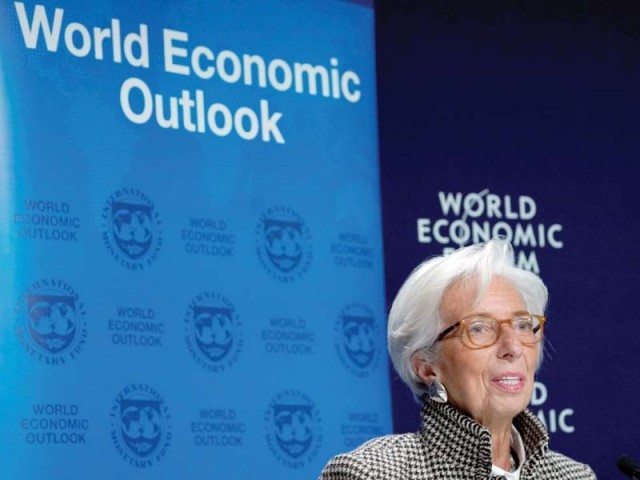 The report noted that growth in Middle East, North Africa, Afghanistan and Pakistan region is also expected to pick up in 2018 and 2019 but it will remain subdued. PHOTO: REUTERS

SWITZERLAND / DAVOS: Growth in Pakistan is expected to pick up in 2018 and 2019, but it will be subdued, the International Monetary Fund (IMF) noted on Monday in its update of the World Economic Outlook.

The report was launched on the opening day of the World Economic Forum meeting in Davos, Switzerland.

Pakistan achieved a growth rate of 5.3% during fiscal year 2016-17, the highest in a decade, but it was short of the government’s targeted 5.7%.

Despite being held back by subdued growth in the manufacturing and agriculture sectors, Pakistan’s economy has been showing an upward trend in the first six months of the ongoing fiscal year.

IMF says Pakistan can manage without its support

With the target for 2017-18 set at 6%, most believe the economy would be able to continue its growth, if not meet the goal.

The IMF also revised up its forecast for world economic growth, saying sweeping tax cuts in the US were likely to boost investment in the world’s largest economy and help its main trading partners.

The report noted that growth in Middle East, North Africa, Afghanistan and Pakistan region is also expected to pick up in 2018 and 2019, but it will remain subdued.

The IMF underlined the need for economic efficiency, inclusiveness of growth and the urgency to take measures that will counter next global downturn.

This is the first time that the World Economic Outlook Update has been launched in Davos.

Global growth has been accelerating since mid-2016, and all signs point to a further strengthening both this year and the next, said Christine Lagarde, the managing director of the IMF.

While this is welcoming news, she cautioned that any kind of complacency would be a mistake. “We certainly should feel encouraged, yet we should not feel satisfied,” she added. The IMF said that the current economic position might appear to be a sweet spot for the global economy, but prudent policymakers must look beyond the near term. It encouraged global leaders to build policy buffers, reinforce defence against financial instability and invest in structural reforms.

The IMF managing director said that there are still far too many people left out from the recovery. In fact, about one fifth of the emerging markets and developing countries saw their per capita incomes decline in 2017

At the same time, while growth is higher, it is mostly cyclical. Absent reforms, the fundamental forces that had us worried about the “new mediocre” – and future growth potential – will remain in place, she added.

The IMF official said that there is also significant uncertainty in the year ahead. The long period of low interest rates has led to a build-up of potentially serious financial sector vulnerabilities.

“We are seeing a troubling increase in debt across many countries and we need to remain watchful.”

This week is a perfect opportunity for world leaders to focus on those repairs. The theme of this year’s WEF annual meeting is: ‘Creating a shared future in a fractured world.

She said that the shared future will depend upon shared growth. “The policymakers should use this moment to make the difficult structural and fiscal reforms that might not happen otherwise.

“This means taking steps to boost long-term growth, paying down debt in places where it is too high, and in other places, investing back into the economy through infrastructure and effective social spending.

“The growth needs to be more inclusive, not only across countries but also within them. Some areas of focus include training for workers displaced by automation, new opportunities for young people, and bringing more women into the labor force.”

She said that there should also be shared global responsibility. “We need robust international cooperation if we are going to tackle shared problems – including fighting corruption, improving the international trading system, tackling tax evasion, and addressing climate change.”

The IMF said that in advanced economies where output is close to potential, still muted wage and price pressures call for a cautious and data dependent monetary policy normalisation path.