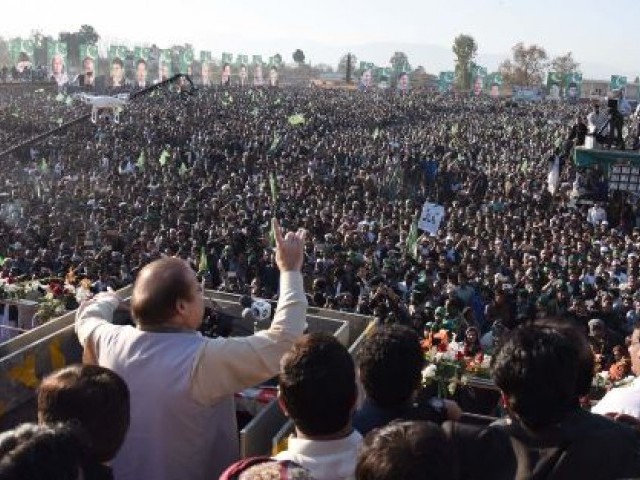 HARIPUR: Former prime minister Nawaz Sharif on Saturday said the opposition politicians who gathered together in a protest rally in Lahore earlier this week had the one-point agenda of stopping Nawaz Sharif and his programme of development for the country.

Referring to the PAT-led protest on Lahore’s Mall Road three days ago, Sharif questioned the stances of the leaders who joined the protest. “Those who used to hurl shoes at each other are now standing in the same line, which raises the question where their principled politics is,” he asked.

“Their sole agenda was to oppose Nawaz Sharif. This was their only programme,” he said. “I was disqualified but the people rejected the decision. The proponent of ‘the new Pakistan’ has given nothing but the politics of deceit and allegations.”

The three-time prime minister claimed that his rally in Haripur was 10 times bigger than the opposition’s show in Lahore. He criticised Qadri saying that he was not afraid of firecrackers.

In his speech, Sharif came down hard on Khan, the PTI chief. Calling him Ilzam (allegation) Khan, Sharif questioned his political values. Khan, he said, threatened the chief secretary and others with jail. “Imran Khan himself will go to jail,” Sharif said.

“Those indulging in the politics of allegations had done nothing for Khyer-Pakhtunkhwa,” he said. “How many schools, medical colleges, universities and hospitals have they [the PTI-led government] has established?”

He rejected the PTI claim of planting two billion trees in the province. “Not even 200,000 trees have been planted.”

Referring to his disqualification by the Supreme Court, she said: “Five judges threw Nawaz Sharif out but the people’s court elected him again. Double standards of justice are unacceptable. Justice will be served if it remains the same for the rich, for the poor and for the prime minister.”

Highlighting the performance of the ruling Pakistan Muslim League-Nawaz (PML-N), Sharif boasted about spreading the networks of motorway across Pakistan. “PML-N is another name of progress. We have taken the country out of darkness and ended [electricity] load-shedding,” he maintained.

He promised housing schemes for the homeless people on easy installments if the PML-N was re-elected in the 2018 elections. “I see the PML-N everywhere in the country in 2018. The people will reject conspiracies. We have worked despite sit-ins and dances.”

Earlier, addressing the gathering, Maryam Nawaz stated that the conspirators who attacked a democratic government had been taught a lesson in the by-elections. “Those who beat the drums of Iqama and Panama have failed as Nawaz Sharif commands love of the people,” she said.

“The conspirators had to run from Lahore after seeing empty seats in their show,” she said. “Abusive language against parliament is an attack on democracy which is then an attack on the people,” she added.