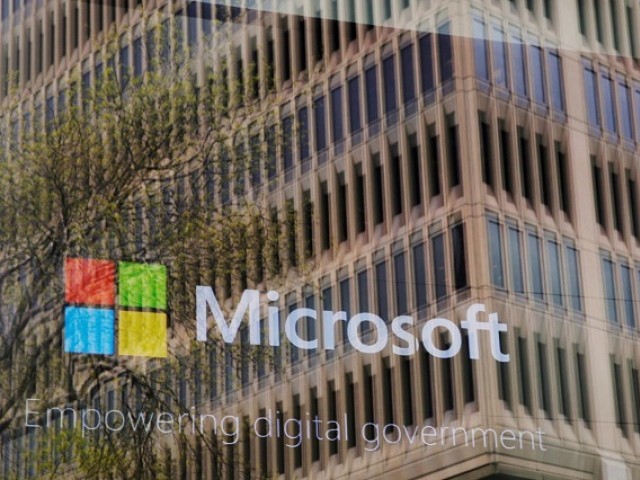 An promotional video plays behind a window reflecting a nearby building at the Microsoft office in Cambridge, Massachusetts, US on May 15, 2017. PHOTO: REUTERS

The list, which aims to identify the industry’s top financially successful and organizationally sound organizations, features US tech giants such as Apple, Alphabet, International Business Machines and Texas Instruments, among its top 10.

Google says ‘no changes’ to mapping platform in China after report

The remaining 90 companies are not ranked, but the list also includes the world’s largest online retailer Amazon and social media giant Facebook.

The results are based on a 28-factor algorithm that measures performance across eight benchmarks: financial, management and investor confidence, risk and resilience, legal compliance, innovation, people and social responsibility, environmental impact, and reputation.

The assessment tracks patent activity for technological innovation and sentiment in news and selected social media as the reflection of a company’s public reputation.

The set of tech companies is restricted to those that have at least $1 billion in annual revenue.

Here are the trending items of CES 2018

According to the list, 45 per cent of these 100 tech companies are headquartered in the United States. Japan and Taiwan are tied for second place with 13 companies each, followed by India with five tech leaders on the list.

By continent, North America leads with 47, followed by Asia with 38, Europe with 14 and Australia with one.

The strength of Asia highlights the growth of companies such as Tencent, which became the first Asian firm to enter the club of companies worth more than $500 billion, and surpassed Facebook in market value in November.

US lawmaker asks Intel, others for briefing on chip flaws