Commission’s observations are not SC’s findings

Commission’s observations are not SC’s findings 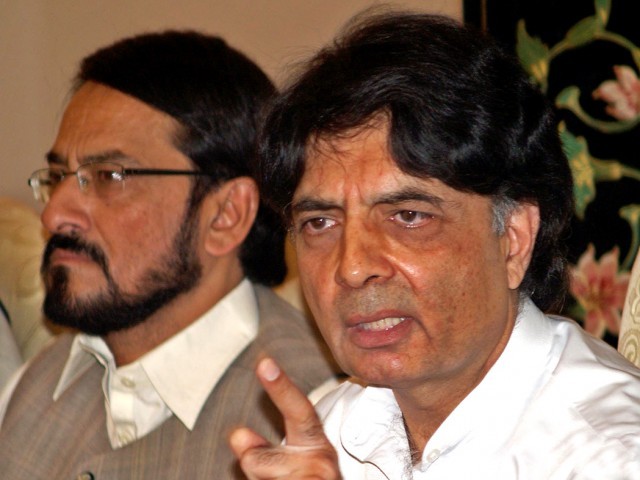 ISLAMABAD: The Supreme Court has held that Justice Qazi Faez Isa’s findings as head of the Quetta Commission against ex-interior minister Chaudhry Nisar Ali Khan are not to be treated as findings of the apex court.

A three-judge bench, headed by Justice Asif Saeed Khosa, has issued a five-page written order in a suo motu case regarding the August 8, 2016 Quetta carnage.  Last week, the court disposed of the matter.

In 2016, the Supreme Court assigned Justice Qazi Faez Isa to a one-man judicial commission to probe the August 8, 2016 suicide blast on the premises of a Quetta hospital.

The commission, in paragraph 17 of its report, observed that the former interior minister has displayed little sense of ministerial responsibility as he called only one meeting of the Executive Committee of NACTA in over three-and-a-half years, violated the decisions of the NACTA Executive Committee, and that “He met the head of a proscribed organisation, widely reported in the media with his photograph, but still denied doing so.” It also noted that he accepted the demands of the proscribed organisation regarding CNICs, Inexplicably delayed proscribing terrorist organisations, and failed to proscribe a well-known terrorist organization, Justice Isa further said.

Attorney General for Pakistan Ashtar Ausaf Ali appearing before the bench on January 8 took exception to the contents of the same paragraph of the findings and said the observations are person-specific and were uncalled for in the absence of any opportunity of hearing afforded to the then-interior minister.

The order further said that the incidents taking place in Quetta on August 8, 2016 were indeed tragic and the Supreme Court has gone the extra mile to address different issues arising out of the incident.

The court finds that most of the major issues arising out of the said incident have seriously been attended to or solved by the Balochistan and federal governments after persistent nudging by the apex court.

“For whatever has been achieved through the present proceedings we express our gratitude to the members of the legal fraternity at Quetta for their relentless efforts made. We are also grateful to both governments and concerned officials who have cooperated with the court on most of the relevant issues.”

The court also appreciated the efforts of law officers for the resolution of most of the issues and it is hopeful that the provincial government will keep on taking steps toward the further alleviation of the difficulties faced by the families of the deceased and the injured victims.

“We have been informed a committee of the judges of the Balochistan High Court is already seized some of the relevant issues and we hope that the said committee will attend to all the relevant and outstanding matters. With these observations, the suo motu case, as well as the civil miscellaneous applications filed therein, are disposed of.”

The court also noted that both governments have already taken a number of steps toward protection of Hazara community and safeguard their fundamental rights. “We expect that the federal and provincial governments to continue their efforts in that regard and to leave no stone unturned for securing the lives, legal rights and legitimate interests of the said section of the society.”