A senior Pakist­ani intell­igence offici­al said one of Osama bin Laden's daught­ers had seen her father being shot dead.
By Reuters
Published: May 3, 2011
Tweet Email 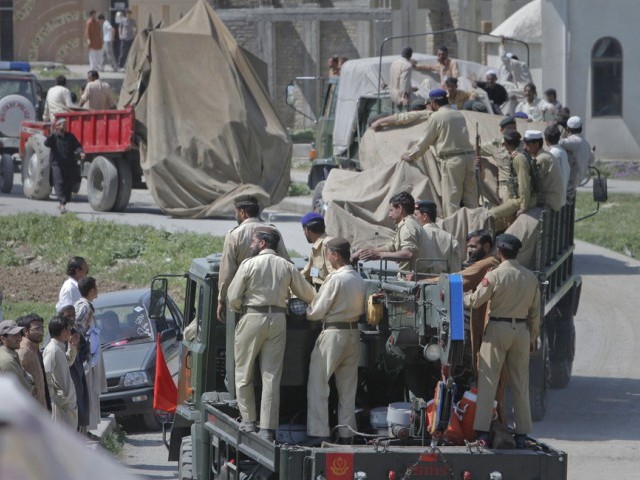 Pakistani soldiers remove the wreckage of a helicopter covered with it tarpaulin from a compound, where locals reported a firefight took place overnight in Abbotabad, located in Pakistan's Khyber Pakhtunkhwa province May 2, 2011. Al Qaeda leader Osama bin Laden was killed in a firefight with U.S. forces in Pakistan on Sunday, ending a nearly 10-year worldwide hunt for the mastermind of the Sept. 11 attacks. Obama said U.S. forces led a targeted operation that killed bin Laden in Abbotabad north of Islamabad. PHOTO: REUTERS/FILE

ISLAMABAD: A senior Pakistani intelligence official said one of Osama bin Laden’s daughters had seen her father being shot dead by US forces, and was one of about 10 relatives of the al Qaeda leader in custody pending interrogation.

The official, who declined to be identified, said the daughter, aged 12 or 13, was one of the people who had confirmed that the mastermind of the Sept. 11, 2001 attacks had been killed by US commandos in a raid early on Monday.

The relatives — one of bin Laden’s wives and up to eight children — will be interrogated and then probably turned over to their countries of origin, and not the United States, in accordance with Pakistani law, he said.

The official said the wife and children were left behind after an American transport helicopter, possibly an MH-60 Sea Hawk, was abandoned because of mechanical problems.

He said there was not enough room for the group on the other helicopters, which were transporting bin Laden’s body, other male captives and the commandos.

A small US strike team dropped by helicopter to bin Laden’s hide-out in Abbottabad and shot him dead.

The revelation bin Laden had been holed up in a compound in the military garrison town for years has threatened to worsen US ties with Pakistan, and raised questions over how the al Qaeda leader could live in comfort near Islamabad.

The Pakistani intelligence official acknowledged bin Laden’s whereabouts may cause problems with the United States, and also embarrass Pakistan.

“It looks bad,” he said. “It makes us look like a fool or an idiot. It’s pretty embarrassing.”

But, he added, the CIA had not had any luck finding bin Laden for 10 years either. “Had we known where he was, we would have gotten him ourselves,” the official said.

The White House counterterrorism chief said on Tuesday there was no evidence Pakistani officials knew bin Laden was living at a compound deep inside the country, but the United States was also not ruling out the possibility.

Echoing President Asif Ali Zardari, the Pakistani official said the United States had acted alone in killing bin Laden, and that it had not asked for permission to enter Pakistani airspace.

“There is every possibility that what radars were there (in Abbottabad) were jammed,” the official said, adding that up to 40 commandos had attacked the bin Laden compound.

But he said it was possible that some of the US aircraft used in the raid had come from the Pakistani air base of Ghazi, just 54 km away from Abbottabad, while the transport helicopters possibly came from Afghanistan.

Ghazi was used by the United States for humanitarian relief operations after the floods of 2010.