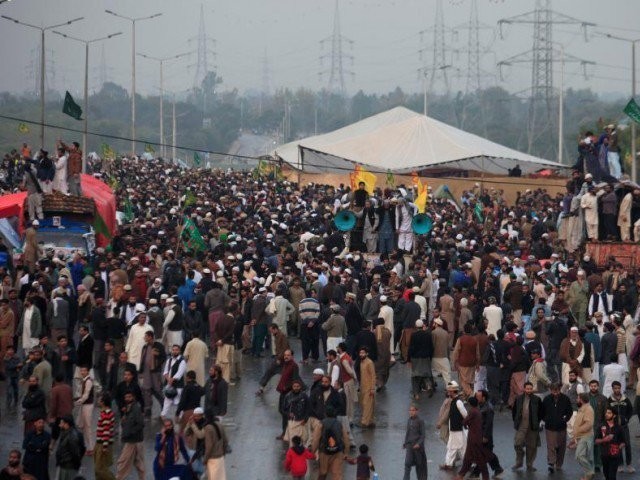 ISLAMABAD: The Islamabad High Court (IHC) has ordered the authorities to submit the Raja Zafarul Haq report over the controversy surrounding ‘change’ in the oath of lawmakers that triggered a sit-in at Islamabad’s Faizabad interchange late last year.

During the hearing of a case related to the sit-in, Justice Shaukat Aziz Siddiqui also summoned the Intelligence Bureau (IB) chief, the secretaries of law, interior and defence, the chief commissioner and the police chief in Islamabad on the next hearing on February 9.

“Don’t compel the court or it could [even] summon the prime minister,” Justice Siddiqui said, expressing dissatisfaction with the performance of the officials as neither the report nor para-wise comments had been submitted in the court.

The National Assembly had passed an amendment to the Election Act, 2017, which was aimed at changing the eligibility criteria for a political party head, but it ended up touching the subject of the Finality of Prophethood or Khatm-e-Nabuwwat.

That triggered a protest by the Tehreek-e-Labbaik Pakistan (TLP), featuring a 21-day-long sit-in at Faizabad Interchange. The protesters forced the government to accept their demands after a government operation to break up the sit-in went awry and the protests spread to several parts the country.

In a previous order, Justice Siddiqui had stated that the “leadership of dharna, prima facie, were involved in an act of terrorism”, adding that all the institutions of the state were expected to act in unison.

“It is made clear that faith on Khatm-e-Nabuwwat is of every Muslim, and few persons cannot be allowed to claim exclusive right to its protection,” Justice Sidiqui had said.

He also stressed “the serious need for our sensitive institutions to dispel this impression that activity of Faizabad Interchange (dharna) is sponsored by the intelligence agencies”.

Justice Siddiqui said the twin cities remained paralysed because of the sit-in. “This is not freedom of expression rather anti-state activity,” he said, adding that calling judges and others names is ‘intolerable’.

He had observed that patients were dying for want of access to hospitals, traders were crying for lack of business activity and students were being deprived of their right to education. The right to free movement of almost six million people of the twin cities was usurped by the dictatorial act of one person and passive approach of law-enforcement agencies that added to the miseries of citizens, he had stated.