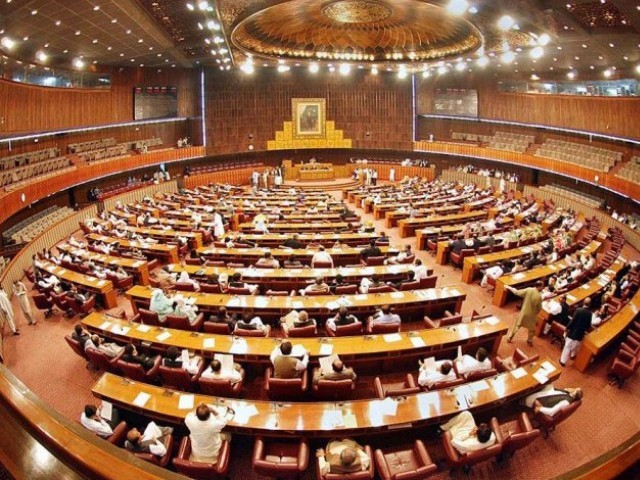 Lawmakers demand public execution of murderers and rapists in the wake of Kasur incident. PHOTO: APP/FILE

ISLAMABAD: In a landmark development, the National Assembly on Friday passed a bill to extend jurisdiction of the Supreme Court and the Peshawar High Court (PHC) to the Federally Administered Tribal Areas (Fata).

The Supreme Court and High Court [Extension of Jurisdiction to Federally Administered Tribal Areas] Bill, 2017 was officially not part of the agenda and was moved by the government to the utter surprise and consternation of one of its ally, the Jamiat Ulema-e-Islam-Fazl (JUI-F).

On Thursday, the routine proceedings of the National Assembly were suspended to discuss at length the brutal killing of a minor girl in Kasur. However, after discussing the issue for a little while, the government moved the bill.

The proposed legislation aims at extending jurisdiction of the higher courts to tribal areas “for safeguarding their rights and ensuring them proper administration of justice in accordance with the Constitution.”

When Minister for Law and Justice Bashir Virk tabled the bill, the JUI-F’s Naeema Kishwer protested to the speaker for introducing the bill despite not being on agenda. “Mr Speaker you are not only violating the rules of business but also not giving due time of two days to debate the bill,” she said.

The JUI-F lawmaker also pointed out lack of quorum in the house but it was found in order. Despite her protest, the speaker laid it before the house, where only Kishwer opposed it. The house also rejected all the three amendments proposed by her.

The JUI-F lawmaker’s amendments were aimed at replacing the PHC with Islamabad High Court, a change which was strongly opposed when the bill was in the standing committee. The passage of the bill was followed by thumping of desks from both sides of the aisles with lawmakers congratulating each other.

Opposition leader Khursheed Shah congratulated the house, saying they were expecting that the government would also table the Fata reforms bill for merger of the tribal areas with Khyber-Pakhtunkhwa (K-P).

Minister for States and Frontier Regions (Safron) Abdul Qadir Baloch said credit for ‘this landmark legislation’ went to the Pakistan Muslim League-Nawaz (PML-N) as in the past 70 years nobody could ‘dare’ do that. He said Fata reforms and merger would also be taken care of in a similar manner.

Earlier, the house strongly condemned the brutal incident of Kasur, which the opposition calling it a sign of government failure. The emotionally-charged lawmakers demanded public executions of murderers and rapists.

Shah started the debate by lambasting the Punjab government for its ‘failure’ to stop such incidents, mentioning that it could not arrest and punish culprits in previous such cases in the same area.

“In Punjab, more than 700 incidents of criminal nature have occurred but nothing has been done to arrest culprits,” he said, adding that he feared in such a scenario mob justice might become the order of the day.

Shah said how such incidents could be stopped when the federal government was busy protecting itself. “I think there is no need for legislation but strict implementation of the law to prevent a heinous crime like the one in Kasur that has pained every Pakistani,” he added.

Shah suggested public execution of such criminals for making an example of them.

Mohisn Shah Nawaz, the Parliamentary Affairs secretary from the PML-N, said everybody needed to look at his own house as Kasur-like incidents were happening everywhere.

“I believe public executions should be held for anyone who commits such brutal crimes,” he said adding, that he knew non-government organisations would create a hue and cry over such a proposal.

“But isn’t the incident also a violation of human rights?” he asked.

Pakistan Tehreek-e-Insaf’s Shireen Mazari also lashed out at the government, saying the issues were politicised after the government failed to protect common citizens and fired at protestors at point-blank range.

“What happened to the perpetrators of child pornography in Kasur in 2015? The law minister of Punjab then stated it was a real estate issue, but nobody knows if any arrest was made after the incident,” she added.

Minister for Information Marriyum Aurangzeb said child abuse and similar issues must be made part of curricula for awareness of children. Later, the house was adjourned to meet on Monday.