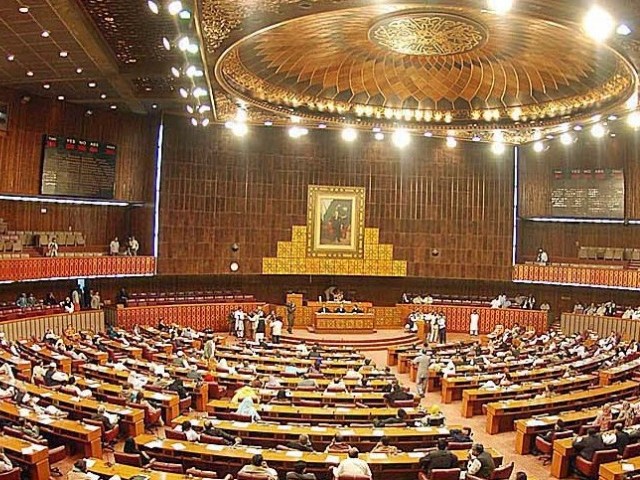 Proceedings were adjourned due to a lack of quorum. PHOTO: APP/FILE

ISLAMABAD: The government introduced a bill in the National Assembly on Friday to extend jurisdictions of the Supreme Court of Pakistan and the Islamabad High Court (IHC) to the Federally Administered Tribal Areas (Fata), with a view to mainstreaming the region.

The tabling of the bill, by Law Minister Zahid Hamid, appeared to be unwelcomed by Mahmood Khan Achakzai of the Pakhtunkhwa Milli Awami Party (PkMAP) – a government ally – who pointed out a lack of quorum, forcing the chair to adjourn the sitting for the day.

The Extension of Jurisdictions to Federally Administered Tribal Areas Bill, 2017 aims to bring the people of Fata into the mainstream. Under the bill, the Supreme Court would have the same jurisdiction in Fata as it has in the Islamabad Capital Territory (ICT). Similar would be the case with the IHC.

“It is necessary that the jurisdiction of the Supreme Court of Pakistan and the Islamabad High Court should be extended to such areas for safeguarding their rights and providing them proper administration of justice in accordance with the Constitution,” the bill says.

Shortly after the bill was laid, Achakzai pointed out the lack of quorum. “If the government wants to introduce this bill then I would point out quorum,” Achakzai addressed the chair.

The chair ordered for count in the House, and on insufficient presence, adjourned the sitting until Monday.

Currently the 46th session of the Lower House of the Parliament is in progress, which is expected to continue until 21st. Friday’s was the fifth sitting of the ongoing session but it was the fourth consecutive day when the proceedings were adjourned over lack of quorum.

The treasury members were not happy at the pointing out of the quorum. Interestingly, some thought Dr Shireen Mazari of the Pakistan Tehreek-e-Insaf (PTI) had raised the quorum issue. “Why are you blaming me for pointing out the quorum. It was your ally [Achakzai] who pointed it out. Vent out at him if you want,” said Mazari in a very loud voice.

The proceedings on Friday lasted for an hour and five minutes with Speaker Sardar Ayaz Sadiq in the chair for over 40 minutes. Deputy Speaker Murtaza Javed Abbasi presided over the rest of the session. The prime minister and the opposition leader were both absent from the proceedings.

Because of the abrupt adjournment, the House could not take up two government bills, two motions and two calling-attention notices. In the Question Hour, the government provided replies to only seven – out of 40 – starred questions and 20 supplementary questions.

Status quo in FATA has to end: Abbasi

Parliamentary Secretary for Cabinet Secretariat Raja Muhammad Javed Ikhlas informed the House the government had taken a number of steps to address the issues, facing the country in the wake of global climate change.

Ikhlas said the Paris Agreement on Climate Change was ratified in November last year, while Rs3.65 billion had been allocated for the revival of forestry resources and conservation of biodiversity under the Prime Minister’s Green Pakistan Programme.

He added the Council of Common Interests had approved the National Forest Policy and that Rs1 billion had been allocated for wildlife conservation.

Transgression by any institute will derail democracy, says Rabbani