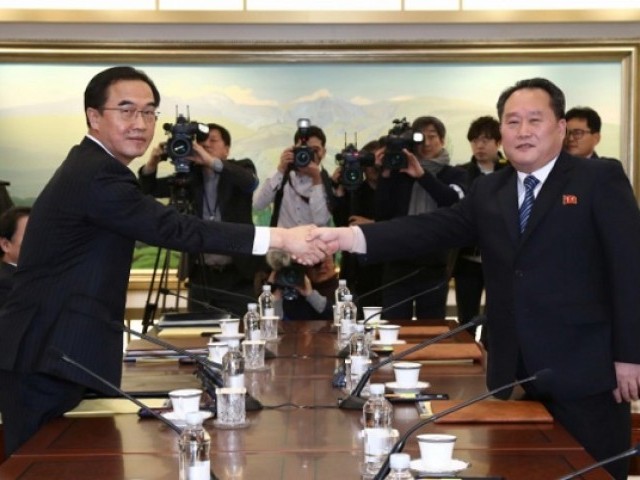 North Korean leader Ri Son Gwon shakes hands with his South Korean counterpart Cho Myoung-gyon during their meeting on the South Korean side of the demilitarized zone separating the two Koreas. PHOTO: REUTERS

Last year Kim Jong Un shocked the world with the unexpected speed of his nuclear missile development, his brutal crackdown on apparent rivals and suspicions that he ordered the assassination of his half-brother with a chemical nerve agent. This year, the North Korean leader is opening January with a diplomatic offensive – but that doesn’t mean a change of strategy.

North Korean officials met their southern counterparts on Tuesday for the first such talks in two years. The outcome was an agreement to send a delegation to the Winter Olympics being hosted by South Korea next month as well as to hold military-to-military talks.

Openness to dialogue is, of course, a mildly positive signal. None of that, however, means North Korea has any intention of slowing its drive for evermore powerful nuclear missiles and warheads, specifically those that would allow it to hit the United States. Instead, Pyongyang appears to be pursuing a deliberate and increasingly successful strategy to drive a wedge between Washington and South Korea.

It’s a move that complicates the position for the Trump administration, potentially making direct US military action against the Kim regime more difficult – if not impossible.

Seoul and Washington are longtime allies, with a formal mutual defense treaty dating back to the Korean ceasefire of 1953. The continuing presence of US troops in South Korea is considered vital for the South’s survival. At the same time, however, they have different priorities.

Washington – and the Trump administration in particular – has made it clear that its most important goal is to stop North Korea acquiring the ability to strike the US mainland. South Korea, in contrast, is already within striking distance of the North’s massive conventional, nuclear and suspected chemical and biological arsenal. So while some in Washington might risk or even relish war to stave off a future threat to the US homeland, Seoul has no appetite for such a risky strategy.

Largely at the behest of the United States, South Korean negotiators made “denuclearizing” the Peninsula – essentially, disarming North Korea – a key part of their diplomatic offer. The North said this was not on the table. But its chief negotiator was also brutally clear – such weapons existed in the North Korean arsenal to be aimed at the United States, not South Korean “brethren.”

The truth is there are serious limits as to how far North Korea can push the United States and South apart. South Korea’s President Moon Jae-in may be more open to renewed connection with the North than many of his predecessors, but South Korea remains heavily dependent on the presence of US troops for its protection, and even more on US arms sales.

In part, some analysts suspect South Korea’s enthusiasm for diplomacy now is in part to avoid embarrassment or incidents during the Winter Olympics, which they fear might otherwise be disrupted by North Korean terrorism or cyber attacks. There is no guarantee relations will remain so good afterwards.

At the very least, US-South Korean military drills are likely to resume after the Games. Although Seoul requested a temporary suspension of exercises ahead of the event, military commanders see them as a crucial part of maintaining South Korean, US and Japanese readiness against any future attack.

What South Korea may well want to see less of is the intense saber rattling the US indulged in over the last year, particularly individual aerial exercises aimed at demonstrating the ability to strike North Korea’s nuclear sites if necessary.

Still, Washington will be unhappy if South Korea can be persuaded to resume closer economic ties with the North, for example by reopening several cross-border economic zones. Washington’s strategy for persuading Pyongyang to slow its nuclear ambitions is heavily dependent on the economic isolation of North Korea.

That’s a strategy that has already been experiencing wider problems. While China has largely followed through with UN sanctions, in part due to its own frustrations over Kim Jong Un’s behavior, Vladimir Putin’s Russia has increasingly emerged as a lifeline for Pyongyang.

In truth, South Korea’s number on goal remains persuading the United States not to take any unilateral action. Although Donald Trump was unable to visit the Demilitarized Zone during his Seoul visit last year, South Korean officials made sure the US president’s helicopter ride showed him that the capital was only 35 miles from the North Korean border.

That puts Seoul well within range of Kim Jong Un’s artillery, and Pentagon projections have warned he could kill as many as 20,000 South Koreans a day – even without the deployment of nuclear weapons. No surprise, then, that the South Koreans wanted show Trump that he should not risk doing anything that could re-ignite war.

Both South Korea and the Trump administration are clearly looking for political tools that they could use to dissuade Pyongyang from its nuclear program. In his visit last year, Trump reportedly asked Moon whether the South might be persuaded to drop its calls for the reunification of the Peninsula, and, by implication, the fall of the Kim regime.

South Korean officials said that was unlikely – the South remains politically committed to reunification, even if few believe it is an imminent possibility. North Korea too uses similar “reunification” rhetoric, but many analysts believe it would only do so under the Kim regime and probably as a result of military conquest.

That’s one reason South Korea is unlikely to stray too far from its alliance with the United States. Indeed, the main worry of many South Korean analysts is that Washington could leave the South exposed by either withdrawing from the Peninsula or sitting out any North-South conflict for fear of North Korean nuclear strikes against the United States.

This week’s diplomatic niceties have almost certainly reduced the risk of any North Korean disruption of the Winter Olympics by cyber attacks or worse. It’s just possible they may have persuaded Kim himself to slow his weapons tests in the coming months. But they have done nothing to fix the underlying problem.