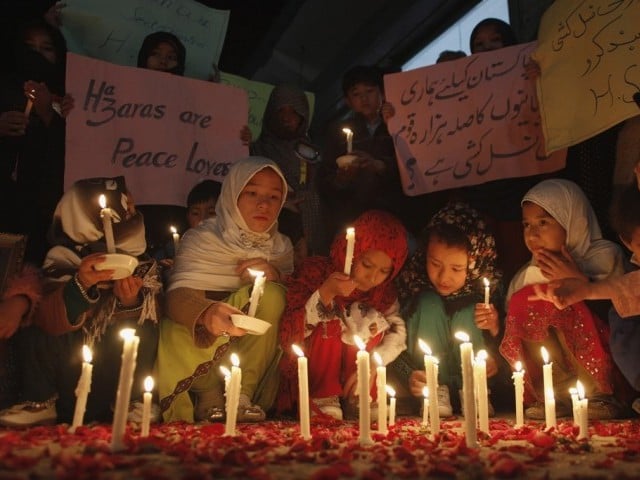 ISLAMABAD: The Supreme Court has urged the Balochistan government to address the hardships facing the Hazara community as it disposed of a suo motu case regarding the terrorist attack in Quetta last year wherein more than 60 lawyers had been killed.

Heading a three-member bench, Justice Asif Saeed Khosa said it the duty of the state to provide security to the Hazaras as they are equal citizens of Pakistani. He added that one SC judge traced the culprits in Quetta bomb blast, but the court cannot provide judges for the probe of such incidents as ‘it is the duty of police to conduct investigations’.

Justice Dost Muhammad Khan said that Hazaras are being targeted in a well-planned manner. He lamented that the provincial government is not interested in eliminating terrorism in the province, adding that it is the duty of the state to protect the citizens and that legislators should study the constitution.

The judge noted that despite directions from the high court, the provincial government has yet to establish a forensic lab.

The three-judge bench, while disposing of the case, said that an order would be passed later.

The bench observed that this would be considered. It was noted that the interior ministry hired Khawaja Haris as counsel, but he did not appear on Monday.

The judicial commission, probing the August 8 suicide attack on the premises of a Quetta hospital, had observed that the Ministry of Interior is without clear leadership and direction; consequently, it is confused about its role in combating terrorism.

“The ministry’s National Security Internal Policy is not being implemented. Officers of the ministry appear more interested in serving the minister than the people of Pakistan,” says the commission’s report, authored by SC Justice Qazi Faez Isa.

The report has found that the two attacks on August 8, 2016, are inextricably linked and were carried out by the same group.

“These were not the first attacks committed by these terrorists. If the functionaries of the state had established a bank of forensic information on past attacks and pursued the cases, they may have prevented the attacks of August 8, 2016. In this regard, the 2012 Terrorism Case Judgment has still not been implemented,” it observes.

The report states that the government of Balochistan wrote another letter also dated August 16, 2016, to the Ministry of Interior to proscribe Lashkar-e-Jhangvi Al-Almi and referred to five specific FIRs that recorded their crimes, which included the murders of policemen and Frontier Corps personnel. The Ministry of Interior did not to respond to either letter, nor proscribed the said organisations.

It is also observed that then interior minister Chaudhry Nisar Ali Khan had displayed little sense of ministerial responsibility as he called only one meeting of the Executive Committee of NACTA in over three and a half years, violating the decisions of the body’s executive committee.

It also observes that the investigators think that there is some connection between the attackers and their handler to Afghanistan. However, neither the first attack on Bilal Kasi nor the subsequent attack by the suicide bomber could have been possible without local assistance and participation. The suicide bomber was a Pakistani national and so were a number of his accomplices.

The report states that the Inter-Services Intelligence (ISI) must be providing valuable input for combating terrorism but surprisingly it cannot be contacted to convey information on suspicious or terrorist-related activities, as it does not have a website, address, email, or telephone number. The commission checked whether the intelligence agencies of other countries were also unreachable.

Federal ministries, institutions, and the provincial departments should only use stationery which provides contact details, including postal address, email, and telephone number, it suggests.

According to the commission, the Anti-Terrorism Act needs to be enforced, and terrorist groups must be proscribed without delay. They must not be permitted to hold meetings, and members of proscribed organisations should be prosecuted in accordance with the ATA.

The commission report notes that there is a breakdown in the implementation of law and order, which has led to rules being repeatedly violated without consequences, and this has fostered a culture of nepotism.

“There are unabashedly clear instances of nepotism when unqualified individuals were illegally appointed. This includes the illegal appointments of at least four secretaries, including the health secretary, whose brothers include retired lieutenant general and a federal minister.”

A restaurant in Quetta’s Hazara Town is by women, for women

The Frontier Corps is not responsive to the civil administration, and the role of the Frontier Corps in respect to policing is unclear, according to the report, which adds that the commission also finds that the Western borders are not monitored, and even from the official crossings there is a free and unrestricted flow of people and goods including, weapons, ammunition, and other contraband.

The report notes that the Ministry of Religious Affairs and Inter Faith Harmony is a moribund and is not fulfilling its most basic mandate for interfaith harmony or even monitoring the seminaries.

The commission recommends that if the media broadcasts and propagates the views of terrorists, those doing so must be prosecuted in accordance with the law.

“ATA is equally applicable to public functionaries and they should not be cavorting with proclaimed members of banned organisations. Hypocrisy must stop. There needs to be a nationwide streamlining of national policy and all government servants need to abide by it or face the consequences,” the report says.

The National Action Plan should be made into a proper plan, with clear goals, a comprehensive monitoring mechanism, and periodic reviewing. It should also be translated into Urdu for wider dissemination and understanding.

Meanwhile, the AGP on Monday told the bench that the federal government had examined the report and the recommendations which could be implemented immediately had been in place – and one such recommendation was strengthening NACTA. He added that the report would be used as a guidance tool where it was in conformity with the policy of the govt.

“The National Action Plan will be implemented in letter and spirit. The government has gone beyond the recommendations and had also taken steps for establishing safe city concepts.  control of terror financing and establishing electronic surveillance mechanism,” said the AGP.