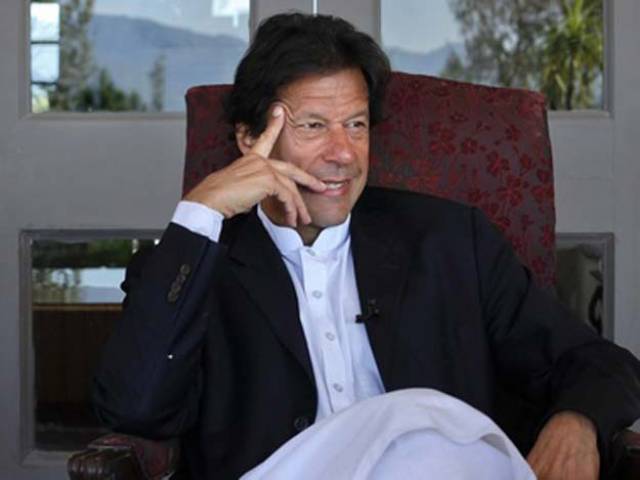 Says marriage is a personal matter and the PTI chairman can marry anyone if he wants to. PHOTO: FILE

ISLAMABAD: Both the electronic and social media on Saturday remained abuzz with reports of a third marriage of Pakistan Tehreek-e-Insaf (PTI) chief Imran Khan, but neither Khan nor his party responded to the reports at the official level.

It all started after a local newspaper on Saturday claimed that Khan has married, for the third time, a lady he has been visiting for spiritual guidance for quite some time.

The report claimed that the marriage ceremony was held in Lahore on January 1 and was attended by the PTI chief’s close aides including Awn Chaudhry, Naeemul Haque, Mufti Saeed, a British Pakistani businessman and Khan’s personal friend Zulfi Bokhari.

Khan, who on Saturday addressed a public gathering in Chakwal, was repeatedly asked by the media to comment on the news but he preferred not to comment for some reasons. However, some PTI leaders in their individual capacity either rejected the news or termed it a purely ‘private matter’.

Commenting on the rumours in her tweet, PTI leader Dr Shireen Mazari said, “Ridiculous! When SC deprives IK’s detractors from doing accusatory stories of corruption, they create stories of his “marriage”! Somewhat pathetic too!”

“For the record, it is Chairman PTI Imran Khan’s personal business and no one else’s, when, with whom and where he decides to marry,” she added.

Khan’s Political Secretary Awn Chaudhry, who according to the report was one of the two witnesses signing the marriage papers, also took to Twitter. “This is irresponsible yellow journalism. I had categorically denied the veracity of this planted gossip. Totally concocted story.”

Later he clarified: “It’s his wish that Khan should marry a woman, and that woman make his life pleasant and wonderful. But, it [this subject] has nothing to do with politics.”

Naeemul Haque, however, offered no public comment over the issue.

Earlier, in 2017 a local newspaper had reported that Khan had silently been visiting a remote town of Sahiwal where he stays “for a few hours at the residence of his hosts who belong to influential Maneka clan with whom he is said to have a spiritual bond.”

Imran under pressure to get married

The report had suggested that Khan there meets one Bushra Bibi, known as Ms Pinki in the area, for spiritual advice. Now, the latest report in this regard claimed that Khan had actually married that woman.

However, Bushra’s son who on Saturday appeared on a local news channel categorically denied the report that her mother had married Imran Khan.

The PTI chief was married twice but neither of his marriages worked. He married Jemima Goldsmith, a British national, in 1995 and ended relationship with her in 2004. He then married Reham Khan in 2015 but the relationship ended within just 10 months.

A few months ago, Khan in response to a question about a third marriage had said in a lighter vein: “I am in a hurry to complete my marriages’ hat-trick”.