Turkey's Erdogan slams US, Israel for intervention in internal affairs of Pakistan

Turkey's Erdogan slams US, Israel for intervention in internal affairs of Pakistan 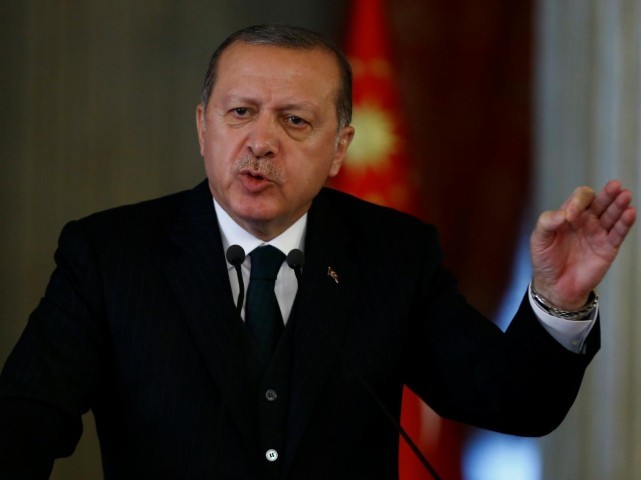 ISTANBUL: Turkish President Recep Tayyip Erdogan on Friday blasted the United States and Israel for their meddling in the internal affairs of Pakistan and Iran.

The same intervention was also seen in countries like Iraq, Syria, Libya, Tunisia, Sudan and Chad, Erdogan told the press in Istanbul before leaving for France for a visit.

“Look, all these countries are Islamic countries and their peoples are all Muslims,” he said.

Since protests broke out across Iran last week, US President Donald Trump has voiced his support for the demonstrators, while Israeli Prime Minister Benjamin Netanyahu praised them for taking to the streets to protest against the government.

In addition, Trump has lashed out at Pakistan for not rendering enough help to Washington to hunt down Afghan terrorists.

In his remarks in Istanbul, Erdogan also urged Washington to reconsider “its sense of justice” as a Turkish banker was convicted in a US court for helping Iran evade sanctions.

“If this is the US understanding of justice, then the world is doomed,” said the Turkish leader.

Mehmet Hakan Atilla, deputy Chief Executive Officer at Turkey’s Halkbank, was accused of several charges including bank fraud and conspiracy to violate US sanctions law, in a New York federal court on Wednesday.

Erdogan claimed that the United States has been operating a process that includes “a serious chain of plots” against Ankara.

“Not only in law but also in economy as well,” he said, warning that bilateral legal accords with the United States were “losing validity.”

“I am sorry to say that but this is how the process will work from now on,” he added.

Turkey-US ties have been strained over an array of issues, including Washington’s military support to Syrian Kurdish militia, whom Ankara listed as terrorists, and its refusal to extradite Fethullah Gulen, a US-based Turkish cleric who allegedly masterminded the failed coup in Turkey in July 2016.

Muslims to become second-largest religious group in US in 2040