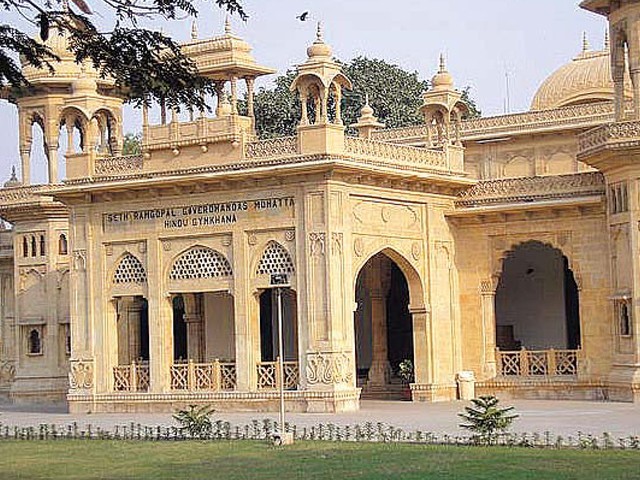 A file photo of the Hindu Gymkhana Building in Karachi, which is also a protected heritage site. PHOTO: FILE

KARACHI: The Sindh government has begun new surveys of the 1,700 buildings and locations that had earlier been declared heritage sites. Soon, 300 buildings in District South will be added to the list.

The tourism, culture and heritage department is surveying the 1,700 buildings on the orders of the court. Earlier, all these buildings had been declared heritage sites by the department. However, after objections from the owners of private buildings and on the court’s orders, the buildings are being surveyed.

While speaking to Express News, Culture Director-General Manzoor Kanasro stated that 350 buildings have been surveyed and 300 have been notified.

The building owners are being informed of the action through advertisements in newspapers, so that in a month they could submit their objections to the department. The non-submission of objections would add these buildings to the heritage list.

He said that attempts to change, modify or deconstruct, to pose threats or to construct building at the sites would be considered a violation of the law under Section 18 of the the Sindh Cultural Heritage Preservation Act, 1994 and violators would be punished. The owners will not be liable for any changes after the declaration. Saifee House, Crystal Ice and Cold, Najmi and Company, Victoria Mansion, Lotia Building, Edward House, Jenning Private School, KRS Captain School, State Guest House, Bristol Hotel,  Haji Abdullah Haroon Trust Building, Russian Embassy Building, North Western Hotel, Chief Secretary House, Katrik Mansion, Judges House, Pakistan American Cultural Centre and the Sindh Club are among several buildings that have been declared heritage sites.