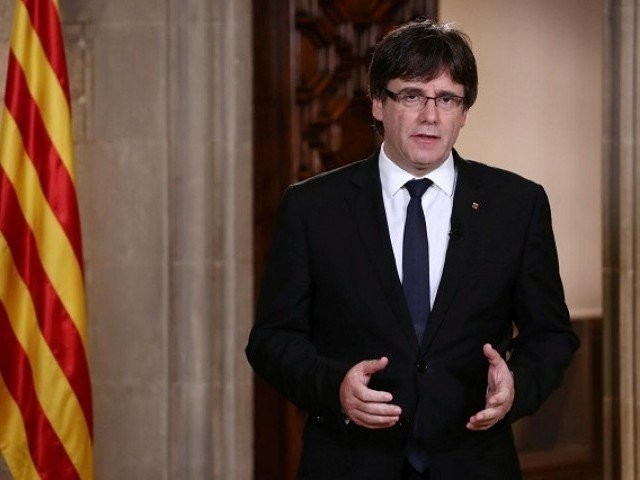 MADRID: Ousted Catalan president Carles Puigdemont on Saturday demanded Madrid reinstate its regional government, which was deposed after an independence referendum that Spanish courts judged illegal, as part of a political settlement.

“As president, I demand the Spanish government and those who support it… restore all they have expropriated from the Catalans without their say-so,” Puigdemont said from Brussels as he called on Madrid to “negotiate politically.”

Puigdemont’s administration followed up the October 1 referendum by declaring independence but Madrid promptly sacked him and his team and, facing arrest, he fled into Belgian exile while colleagues were arrested and jailed.

Puigdemont campaigned for the region’s December 21 snap election from his Brussels exile after a Spanish court charged him with rebellion, sedition and misuse of public funds.

But a solid showing by pro-independence parties in the poll strengthened the hand of the secessionists, albeit they did not capture a majority of votes cast.

In a seven-minute recorded message Puigdemont insisted he was still Catalonia’s “legitimate” leader and that the electorate had shown themselves to be “democratically mature, winning the right to constitute a republic of free men and women.”

Barely a quarter of Catalans want to pursue split from Spain

After the divisive regional elections, how the independence camp intends to rule remains a mystery, with other secessionist leaders, including Puigdemont’s former deputy Oriol Junqueras, behind bars pending trial.

“The ballot box has spoken,” said Puigdemont, who said he hoped the election outcome could kickstart moves towards “dialogue and negotiation.”

“So what is [Prime Minister Mariano] Rajoy waiting for to accept the results?”

Any investiture of Puigdemont as regional leader for a new term while he remains abroad would require a change in regional parliamentary statutes.

Rajoy on Friday denounced as “absurd” any idea that Puigdemont could govern from exile and Ines Arrimadas, regional head of the anti-independence Cuidadanos party, agreed.

“Mr Puigdemont believes he can be president of the Generalitat (regional executive) via internet and Whatsapp,” said Arrimadas.